Geekbench benchmark runs of a Lenovo laptop packing 11th Gen (Tiger Lake / TGL) Intel Core i7-1165G7 and Core i5-1135G7 processors have shown up in the results browser this weekend. Both Tum Apisak and RoGame have Tweeted out links to these interesting benchmark results.

Apisak's link leads to this page which compares two versions of a new Lenovo 82CU laptop featuring TGL processors. Both the i5 and i7 models are 4C/8T models according to this test. Differentiation comes via max clock speeds (2.42GHz and 2.80GHz, respectively) and the GPU/VRAM (80CUs/3GB and 96EUs/6GB, respectively).

The above is an interesting comparison to see but RoGame trumps it by comparing the TGL Core i7 graphics to another contemporary Lenovo laptop packing an Nvidia GeForce MX350 dGPU. The new Intel processor just has the edge in the OpenCL graphics tests in Geekbench. 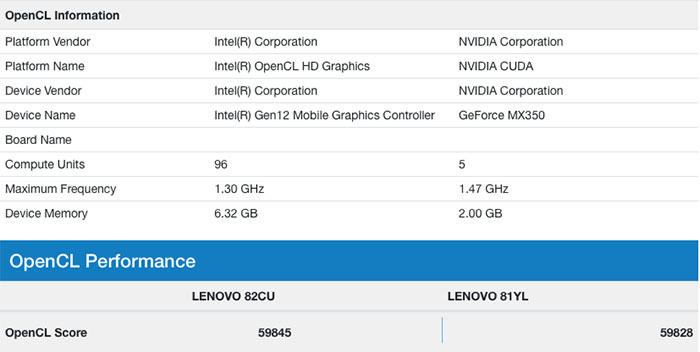 So far we have compared Intel with Intel and Intel with Nvidia but many will be most interested in the TGL's performance compared to AMD's latest mobile APUs. A HEXUS reader sent me this link which pits the Lenovo 82CU laptop with Core i7 (4C/8T, TGL) processor against the Lenovo 81YM laptop with AMD Ryzen 7 4700U (8C/8T, Renoir) APU. 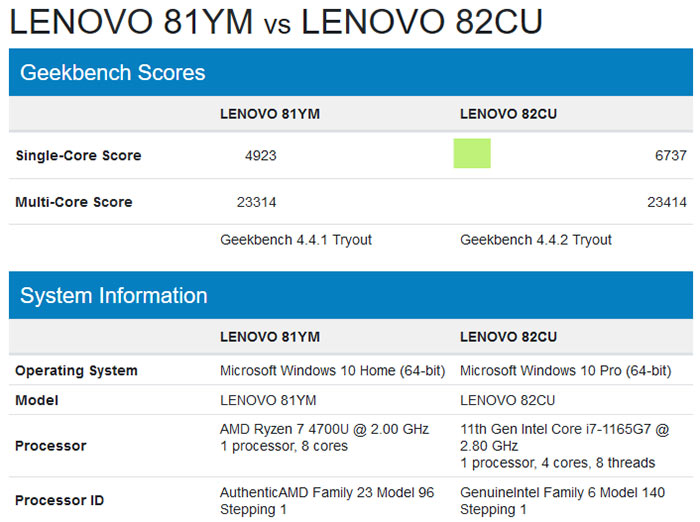 As you can see in the summary above, the new TGL part is significantly ahead in single-core tests. Of the 25 sub-tests AMD only came ahead in one, the memory latency test. Moving onto multi-core, the battle was much more even and quite balanced in general, as the combined score would indicate on first inspection.

So, is TGL going to be a strong strike back for Intel? Former Intel 'Performance Guru', and currently principal architect of Mercedes-Benz Research & Development North America, François Piednoël, seems to think so. Piednoël told his Twitter followers this weekend that "Single threaded performance of Tiger Lake is going to be devastating to AMD and ARM". He tempered his statement by asking whether any consumer computing pursuit other than gaming would benefit from this gain. 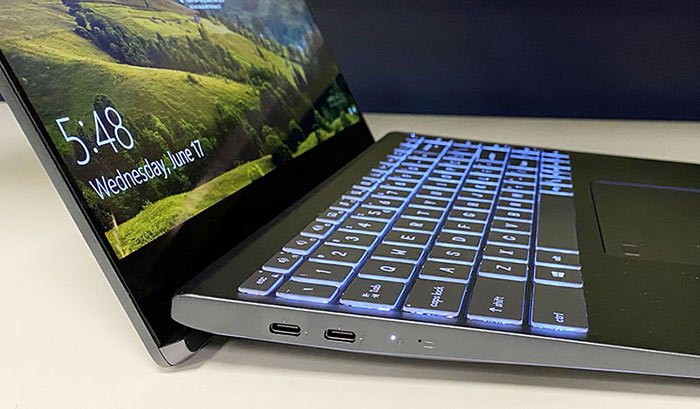 Seems a tad fishy to me
Posted by SpeedyJDK - Mon 06 Jul 2020 11:05
True. Everything from intel is fake scores. Can't trust any of it. And don't want anything from intel before they can enter the competition again.
Posted by LSG501 - Mon 06 Jul 2020 11:25
It's geekbench…. which is now at v5 (although I wouldn't trust that much either) rather than the 2 different v4's being used here.

That clock difference would easily compensate for the difference in opencl performance between gpu's at that sort of level, even more so if it's got the ‘AI’ stuff added.
Posted by Yoyoyo69 - Mon 06 Jul 2020 12:46

I will wait until consumers have access to them and trusted sources verify exactly what chips cab and can't do.

I NEVER pay any attention to Intel propaganda.
Posted by philehidiot - Mon 06 Jul 2020 13:46
AMD has been a little dodgy of late occasionally, too. I think it's a matter of they don't need to if Intel is being honest. But, if Intel boost their scores with trickery, then AMD feels they have to do the same. It's like the mobile SoC benchmarking stuff. If you don't do it, everyone else beats you, so you have to do it to the same extent they do.

Myself, I don't trust any of this stuff. I may have missed it but the main thing here is TDP. If you compared an 8 core AMD chip which is restricted into a 15W envelope and compare it with an Intel chip that's 4 cores, 8 threads but in a 25W envelope, you may well see these results as the single core boost may well go higher. In my mind anyway.

I wait until Anandtech has reviewed stuff before buying. It's that simple, and they have an excellent way of killing that “OOH MUST HAVE SHINY” thing with raw data. Lots of raw data. They often take time but there's a reason for that. The secondary advantage is that you get to buy later when it's cheaper.