Intel execs are busy at Hot Chips 2020 right now with exciting details of new products and technologies in the fields of GPUs, CPUs, FPGAs, quantum computers, and networking components set to emerge from the symposium - which runs until Tuesday. We saw some good indications of things to come only last week, when Intel announced 10nm SuperFIn technology, gaming optimised Xe-HPG GPUs, and 2nd gen Optane SSDs.

Meanwhile, Intel has to continue to promote existing products to consumers the best it can and the way it does this isn't always by championing any technological advantages. Sometimes companies like Intel try to appeal to consumers with frills, sparkles, or other fripperies. A case in point is provided by our headline - as Intel has confirmed a partnership with Marvel for its Intel Core Desktop Processors (yes, Marvel, not Marvell).

Last week there were a few Far East leaks about this marketing partnership, so it is good to see it officially confirmed. At least four of Intel's current gen processors, or rather the packaging, are getting the Marvel Avengers makeover, as below:

The only known difference between these 'KA' suffixed model numbers and the 'K' versions is in the packaging and inscription on the processor lid. The 'KA' chips are yet to appear in the Intel Ark library. I checked for the Intel Core i9-10900KA, for example, but it wasn't among the existing eight Core i9-10900 variants.

At the time of writing we don't know Intel's retail plans for these Marvel Avengers Collector's Edition processors. It could be a limited edition at the same price as the 'K' processors perhaps. We don't have any details on when they will be released either, but you shouldn't have to wait long given the Tweet was sent out on Friday. Earlier in August listings for some of these processors were spotted in Vietnam. 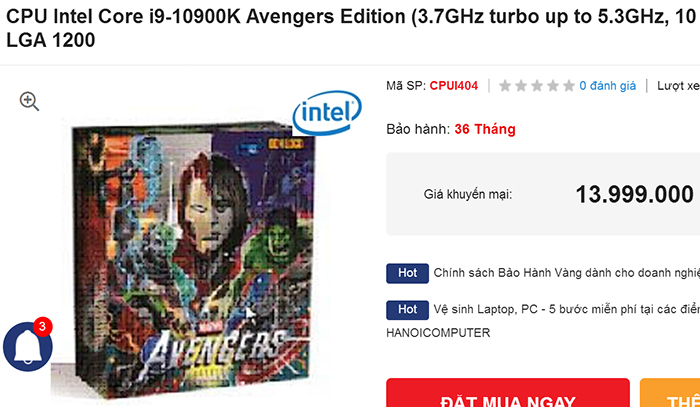 Der8auer sliced up some CPUs and put them under a scanning electron microscope.

Posted by Ttaskmaster - Mon 17 Aug 2020 12:29
Hmm. Didn't expect that.
This sort of product-validation advertising I usually associate with Sapphire GPUs, rather than Intel.
Posted by Darkedge - Mon 17 Aug 2020 12:32
Really? It makes me even less likely to buy a product from them as they obviously have millions to throw away on an utterly pointless branding exercise like this. How about better, cheaper chips? Or Intel actually acting like a moral company? No, have a daft tie in which makes no sense.
I blame Marpets (aka marketing muppets) as they really need to get a clue.
Posted by CAT-THE-FIFTH - Mon 17 Aug 2020 12:41

I look forward to Intel products including a free toy.