An interesting couple of slides, purportedly from Intel, were unearthed this weekend. They don't concern the impending Rocket Lake-S line of processors, due to be released to consumers at the end of the month, but the next generation - Intel Alder Lake-S. We already know Alder Lake will be somewhat different, a major shake up for the Intel processor line, so it is pleasing that the slides are quite revealing.

Above you can see VideoCardz seems to have sourced a slide showing an overview of the Alder Lake-S processor's breakthrough features. Starting with performance claims, the new Golden Cove Core, and advanced 10nm SuperFin process has yielded "up to 20 per cent single thread performance" gains. We might question what the comparison is, however, 20 per cent isn't an extraordinary claim for Intel, which reckons the RKL-S is 19 per cent faster than previous gen. The small print is all important, and this is increasingly the case where Intel marketing is concerned.

More impressive is the "up to 2X multithreaded performance" gains claim. This will be helped along by the new Gracemont Cores and hardware-guided scheduling, explains the smaller text. Moreover, we are expecting ADL-S to come packing up to 16C/24T, which casts a long shadow on RKL-S.

Elsewhere in this highly revealing slide we see the claims of; improved SoC power, up to PCIe 5.0 support, up to DDR5 support, and the adoption of Intel Wi-Fi 6E, and Thunderbolt 4. A sample chip block diagram is also provided, centre. 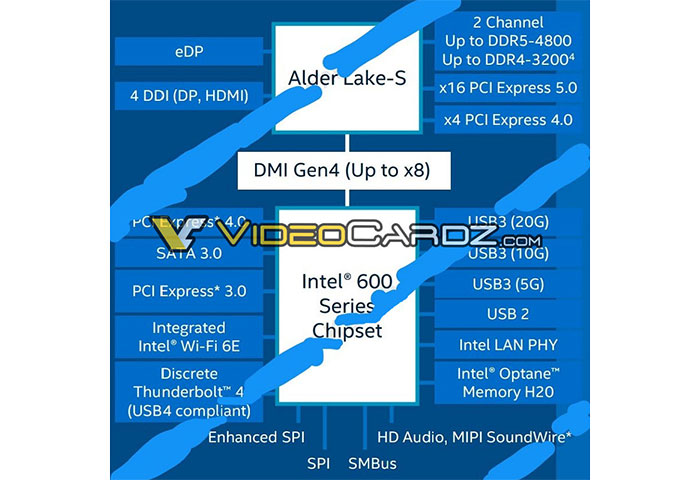 The premature reveal doesn't stop there, as VideoCardz is really spoiling us (I have just eaten a Ferrero Rondnoir with my cup of tea). The slide above is said to be an overview of the platform consisting of the CPU and Intel 600 Series chipset. Probably the biggest news nugget here is that the CPU will have 16 PCI Gen5 capable lanes and 4 lanes of PCI Gen4 standard. Additionally, you will be able to choose between up to DDR5-4800 or up to DDR4-3200 memory support. A little bird told VideoCardz that top end motherboards like 'Z690' would come with dual-channel DDR5-4800 support while cheaper members of the series could be DDR4 only.

The new Socket LGA 1700 houses these elongated processor packages and if you are attracted to ADL-S it looks like you will therefore need a new cooling solution too. Expect to see the launch of ADL-S sometime before year-end.

bae85
Another new socket? Haha! Want a new Intel CPU? You'll need new EVERYTHING. Nearly as bad as Apple for ripping off their customers.

Long running joke now…. though I do believe that AM5 will be around then as well - but I'm pretty sure that AM5 will be roughly similar to AM4 meaning coolers will be able to work with few modifications
Posted by Tabbykatze - Mon 22 Mar 2021 10:43
Of course it's going to be “up to double” nT performance, they're doubling the core count from 8 to 16. They can then satisfy that marketing BullCrap by picking a benchmark which both sets of big.LITTLE cores can do at a similar speed.

bae85
Another new socket? Haha! Want a new Intel CPU? You'll need new EVERYTHING. Nearly as bad as Apple for ripping off their customers.

Very appropriate running joke. Knowing AMD they'll make the first gen AM5 motherboards backward compatible with Zen3 CPUs and DDR4! Something Intel would never dream of doing!
Posted by Corky34 - Mon 22 Mar 2021 11:43
Has there ever been a new CPU from Intel that's not claimed double digit performance increases?