Some further interesting facts about yet-to-be released hardware have been gleaned from the Gigabyte ransomware data leak. Yesterday, I mentioned the AM5 platform details leak, after writing up a report on AMD 3D chiplet technology from the Hot Chips 33 symposium. Today I've been reading about AMD's plans to build iGPUs into all upcoming Zen4 processors, via VideoCardz, and Chips and Cheese.

Our headline suns up the story, as it should. According to the leaked documents, AMD's next family of processors, based on the Zen4 architecture, will all feature iGPUs as part of the design. Currently, you would have to buy an AMD desktop APU to get an iGPU ('G' or 'GE' suffixed Ryzen processor), though I think all the current gen mobile Ryzen and Athlon processors have iGPUs. 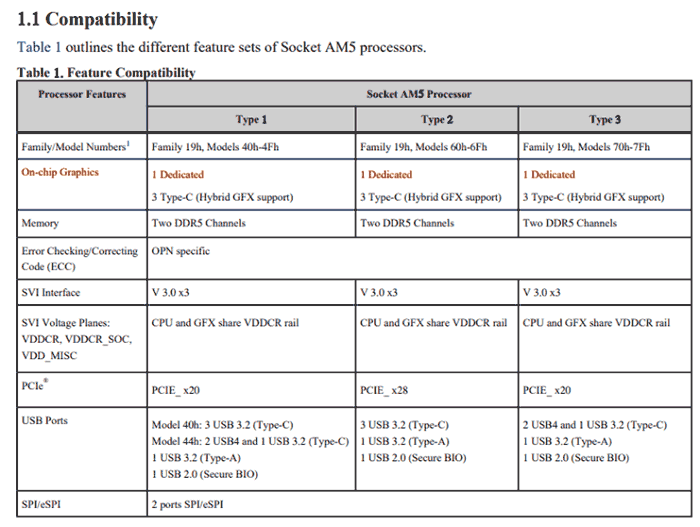 Moreover, it is thought that AMD, with its upcoming Zen4 AM5 processors, will be following Intel's current MO for handling processors that end up with borked iGPUs. They will be recycled to make 'F' type processors (we don't know what they will be called/prefixed/suffixed though). The leaked document puts it this way, "Some OPNs…may not support GFX". 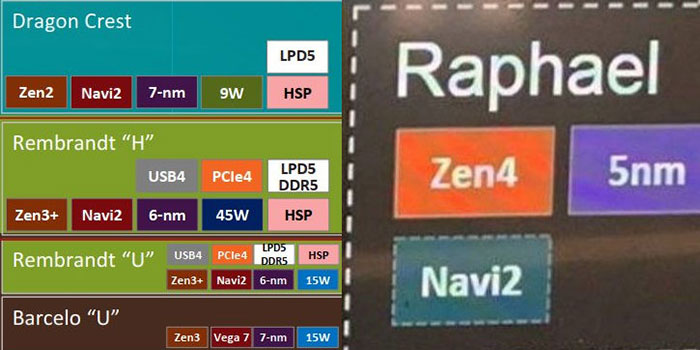 Videocardz points out that a previously leaked roadmap (about 4 months old) made it clear that RDNA2 graphics would be on board all AMD Ryzen 7000 series (Raphael) processors. AMD's mobile processors aren't going to go to Zen4/RDNA2 quite as quickly. The next mainstream mobile processor update planned (Rembrandt H and U) seems to feature Zen3+ CPU cores plus RDNA2 graphics.

Other revelations in the Chips and Cheese shared data include; AMD seems to have made BIOS updates by USB a standard feature with AM5, and Zen4 appears to have a double size L2 cache.

It is going to be really interesting to get the first AMD RDNA2 packing desktop and laptop processors in the labs. It was only the start of this month when we managed to get an AMD Ryzen 7 5700G for testing (Zen3 CPU, RX Vega iGPU), as AMD decided to release this SKU for the PC DIY market.

Posted by Tabbykatze - Tue 24 Aug 2021 11:00
BIOS updates via USB as a standard feature is really good, gets away from having to have a CPU to update a bios to bring compatibility to a board. Does this indicate that AM5 will be another long generation board then?

And hooray for on die graphics for all, this might mean more development of the iGPU-dGPU offloading/passthrough which Intel seems to have down quite well.
Posted by LSG501 - Tue 24 Aug 2021 12:22
Personally I'd rather have the space on the die used for an igpu used for more cpu cores, especially on the upper end of the range…..not to mention the potential impact on the tdp side of things.

When you're looking at 12 or 16+ cores (arguably at 8+) wasting space on a gpu seems rather pointless seeing as most people will add a more powerful dgpu to go with said high performance cpu.
Posted by mers - Tue 24 Aug 2021 12:37
Personally I like the idea . last few boards I've have on board graphics if wanted or needed and have good for initial set up then plonking in a discrete card afterwards after testing. Having the option of better graphics in the chip itself sounds good for someone wanting a fast PC and not worrying about extra cost of a discrete card if they are not into gaming. Through most average peeps I meet , not into gaming just use their PC's for everyday stuff so even 6 cores is a waste , 4 cores would suffice easily. Unless you are doing something specialised that require a high core count this craze for more cores is about as relevent as the RGB fad , marketing = £ notes and joe public fall for it. Damn it , my spare machine ( Old Phenom 11 965 Quad core minces everything I want to do, Internet ,Publshing , graphic design and even some older games if I wanted but don't.
Posted by Tabbykatze - Tue 24 Aug 2021 12:56

LSG501
Personally I'd rather have the space on the die used for an igpu used for more cpu cores, especially on the upper end of the range…..not to mention the potential impact on the tdp side of things.

When you're looking at 12 or 16+ cores (arguably at 8+) wasting space on a gpu seems rather pointless seeing as most people will add a more powerful dgpu to go with said high performance cpu.

It's likely the GPU will be on the IO die and not on the CPU die.

If Intel has managed to have a GPU on their core dies without causing too much issue for the rest of the die then AMD should do so, it is one of the persisting problems of AMD processors.
Posted by watercooled - Tue 24 Aug 2021 13:02

LSG501
Personally I'd rather have the space on the die used for an igpu used for more cpu cores, especially on the upper end of the range…..not to mention the potential impact on the tdp side of things.

When you're looking at 12 or 16+ cores (arguably at 8+) wasting space on a gpu seems rather pointless seeing as most people will add a more powerful dgpu to go with said high performance cpu.

Given AMD's chiplet push, there is a good chance the integrated GPU would be on the IO die, not the CPU core chiplet. As discussed in another thread. Also mentioned in that thread is the possibility that this move could be driven by the IOD becoming pad limited at 6nm; if so, then you either have unused space, or etch a small GPU onto the die which could be immeasurably useful for the huge amount of customers who have no want or need for a substantial discrete GPU. E.g. business or education. Most AMD CPUs are effectively excluded from those markets at the moment because of the lack of integrated video output.

People have been making the “IGP is wasted space” or “IGP wastes power” argument with Intel CPUs for a long time, but even there it's not really that simple. GPUs are different to CPU cores in terms of yield, power density, etc. Not to mention that when idle (or gated off when a discrete GPU is used), the IGP power consumption is negligible or effectively nil. Plus the larger die can help to some degree with heat dissipation.