We already saw teasers from Asus and MSI regarding their upcoming custom cooled graphics cards based around the Nvidia GeForce GTX 1080 Ti. They will shortly be launching the ROG Strix GeForce GTX 1080 Ti OC edition and the GeForce GTX 1080 Ti Gaming X, respectively. Just ahead of the weekend both EVGA and Inno3D dropped HEXUS a line to whet our appetites a little more for their third party designs.

All we have from EVGA is the product name, and a couple of pictures. EVGA's upcoming card is called the GeForce GTX 1080 Ti FTW3. As you can see it’s a triple fan design and uses EVGA's rather new iCX technology.

If you somehow missed Tarinder's deep dive into EVGA iCX cooling about a month ago, then have a look here: EVGA launches iCX cooling on premium GeForce cards. The principle behind iCX is that there is a custom MCU and a multitude of sensors placed around these graphics cards, these can help intelligently direct asynchronous fan control as the 'Precision XOC' utility directs cooling resources better. On modern GeForce cards the GPU isn't always going to be the hottest component and the iCX seems to deal with this proposition better than ACX could. 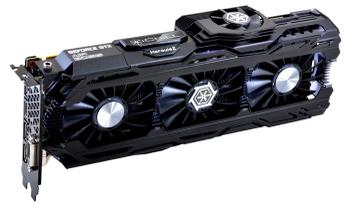 "I believe gamers will love our new iChiLL gaming GPUs." said Ken Wong, Product Manager at INNO3D. "The entire series of GeForce GTX 1080 Ti comes with extreme performance, and we have used the highest quality components worthy of such a product. The iChiLL cooling solution makes the INNO3D custom-built graphics card to be the perfect weapon for every gamer."

Nvidia claims that its new GTX 1080 Ti outperforms its previous flagship consumer gaming card by approx 35 per cent. Check out the re-cap video from Nvidia's GDC presence below if you missed the news last week.

Posted by j.o.s.h.1408 - Mon 06 Mar 2017 10:55
lovely but my 980gtx sli still running nicely
Posted by Valantar - Mon 06 Mar 2017 11:12
Those iChill cards have to be some of the worst product designs ever made. And what, exactly, is the benefit of that 40mm fan perched on top? More tinnitus? At least they should stay cool, even if the shroud looks like it's designed to intentionally block out the fans.
Posted by pastymuncher - Mon 06 Mar 2017 19:29
Knock the ichill coolers all you want but they are a extremely quiet cooler and keeps the card very cool. Mine didn't even run if the card was at 50 degrees or less (waterblock bought with the card is fitted now). I believe that the smaller fan is for additional cooling of the vrm area and is a quiet fan. The ichill cards also tend to have tweaked power delivery and have decent factory overclocks without the premium of cards from manufacturers such as Asus.
Copyright © 1998 - 2020, HEXUS.net. All rights reserved. HEXUS® is a registered trademark of HEXUS.