At Computex this year Nvidia had part of its exhibition area showcasing the visual quality offered by the latest HDR (High Dynamic Range) monitors. With support for these monitors provided by Nvidia Pascal GPUs and an increasing number of modern games, Nvidia is keen to showcase the technology in the best possible light. 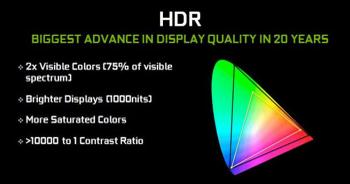 A great way to impress the crowds at Computex with the immediate eye-opening appeal of HDR was thought to be a side-by-side comparison using otherwise similar monitors - one SDR and one supporting HDR visuals. That sounds like an excellent real-life demonstration doesn't it? But what would you do if you set up the demo and the 'old tech' SDR monitor basically looked just as good?

According to a video report by Hardware Canucks, whoever set up the SDR monitor in the Nvidia side-by-side demo was a little too enthusiastic in their attempts to prove the point that HDR provides a far superior image.

Luckily the inquisitive HardwareCanucks got given hands-on time with the Nvidia comparison systems so could poke around and check the monitor settings. The 'super expensive' SDR monitor really looked much worse than the HDR one by its side, with "no contrast, no vibrancy… very TN-like". 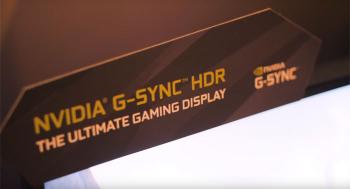 Further investigation revealed that the brightness, contrast and gamma settings of the SDR monitor had been rather strangely adjusted. That's easy to fix, a reset of the colour profile to factory defaults made the SDR monitor "come to life" as the "crippling settings Nvidia had set" were forgotten. With the adjustment done, looking at the Mass Effect Andromeda game playing side by side the HardwareCanucks reporter, Dmitry Novoselov, actually seems to prefer the SDR panel… Nvidia was thus accused of being "sneaky" in "tinkering with the settings".

Regarding the underwhelming HDR visual appeal, itwas explained that a professional colourist will have set the scene colour properties in the HDR visuals and in this case he or she may have preferred a darker more muted look for the sci-fi title. That doesn't make it the best game to demonstrate the appeal of HDR gaming.

lumireleon
The same tricks are used to make 3DMARK and many other software perform significantly better than AMD.

What, you can make them faster by adjusting the monitors brightness??