There has been some excited chat on Twitter this weekend as more than one source tipped that AMD Radeon RX 6000 series graphics cards would boost as fast as 2.4GHz. The ball started rolling with a Tweet from software engineer Patrick Schur listing purported specs of an AIB partner Navi 21 XT graphics card. Then on Sunday the more familiar leakster called RoGame shared what they claimed to be the GPU clock speeds of the Navi21 XT and Navi21 XL. 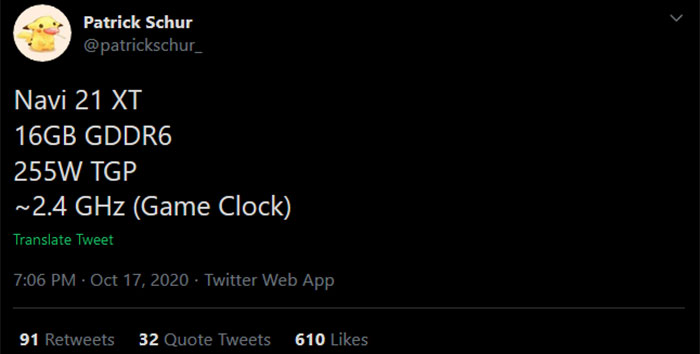 Above you can see the Tweet from software engineer Patrick Schur. You can see he asserts the Navi 21XT GPU based graphics cards will feature a 'Game Clock' of 2.4GHz. Other key specs are its 12GB of GDDR6 VRAM and 255W TGP. Later on in other Tweets and replies, Schur clarified that the 2.4GHz was the game clock of an AIB partner card, and AIBs are testing cards with up to 290W TGP, the 255W figure was for reference.

Moving on RoGame added their weight to the above with the following update:

The 'Big Navi' that everyone has been waiting for is thought to be represented above as the Navi 21 XT. This may well have been the unnamed RX 6000 Series GPU that AMD teased recently as a GeForce RTX 3080 challenger with a trio of 4K gaming benchmarks in modern AAA games. 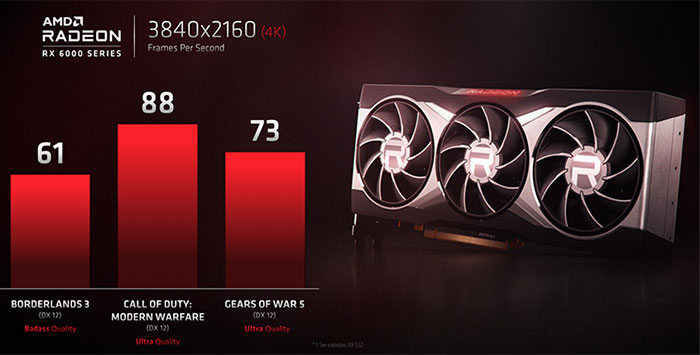 If rumours are correct, AMD is keeping something in reserve. Some sources say that AMD has a Navi 21 XTX GPU with more CUs enabled but there are no credible leaks or material indications about this. When/if the XTX comes it may be an AMD exclusive or special edition, at least to start with. A lower end Navi 21 XE is expected to make a showing too.

Please take the above rumours with a pinch of salt. If it is too salty for you at least you don't have that long to wait until the official RNDA 2 special event hosted by AMD - it will be live streamed next week, on Wednesday, 28th October. 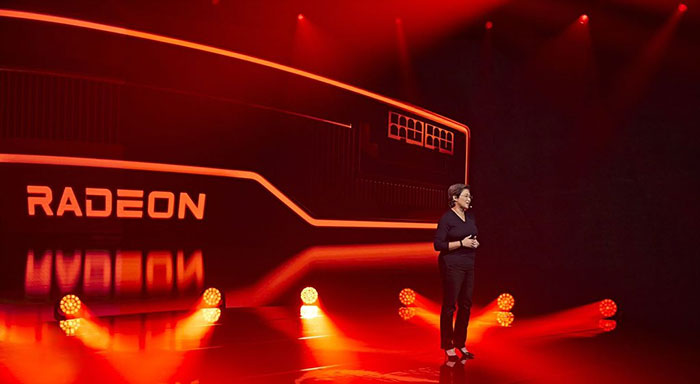 Indeed there are - perhaps there will be a bit more stock of AMD's latest and greatest
Posted by dannyboy75 - Mon 19 Oct 2020 11:44
I'm genuinely pleased that Ampere turned out to be a paper launch. If I could've got my hands on one I probably would have done so, despite having misgivings about ‘upgrading’ from a card with 11GB of VRAM to one with 10GB of VRAM (and the longevity of the latter).

I really hope Big Navi does live up to the expectations that are building now. What with AMD now beating Intel in single-threaded CPU performance, wouldn't it be great if they can offer truly competitive GPU's again too - and even better if they actually exist in physical form for consumers to purchase.
Posted by [GSV]Trig - Mon 19 Oct 2020 11:47
Hope we can get these and the new CPU’s as well, if they have actual cards ready and the drivers are up to scratch then good times ahead for AMD..
Posted by kellyharding - Mon 19 Oct 2020 11:53

[GSV
Trig;304]Hope we can get these and the new CPU’s as well, if they have actual cards ready and the drivers are up to scratch then good times ahead for AMD..

Even if the figures don't quite live up to the current hype, if they're ‘close’ and they have improved their software stack that will be enough for the time being perhaps, especially if cheaper with more memory.