Asus and EKWB have announced a partnership which will see a range of GeForce RTX 30 Series graphics cards be readied for custom liquid-loop systems. As regular HEXUS readers will be aware, these latest 8nm Ampere GPU powered consumer graphics cards from Nvidia are rather power hungry so all come with sizeable coolers, often triple fan models, with hefty thermal blocks covered in fins and laced with heatpipes - taking up to 3 slots. HEXUS has already reviewed thirteen Nvidia RTX 30 Series graphics cards which consistently adhere to that description. 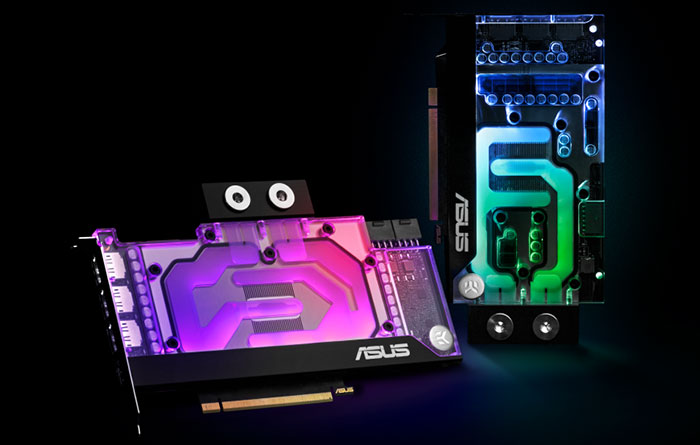 On Friday afternoon both Asus and EKWB wrote to HEXUS to introduce Nvidia GeForce RTX 30 Series graphics cards that "signal a new strategic partnership," between the pair and that provide "enthusiast users the option to have a water blocked graphics card out of the box and ready to place in their custom loop systems". Specifically this will meld Asus Auto-Extreme precision manufacturing with the low hydraulic restriction cooling systems from EKWB . The result - a beefy RTX 30 GPU in an elegant single-slot footprint, with wide ranging chassis compatibility from full tower to SFF builds.

Some more details of the EKWB implementation have been provided. This cooling block features an efficient nickel-plated copper cold plate and EK’s split-flow cooling engine. The cast acrylic top reveals the coolant as it flows through the block, and an aRGB strip that spans the length of the card is Aura Sync-compatible.

These collaborative graphics cards will become available later this month, we are told.

Gigabyte / Aorus also has plans for custom liquid-loop systems. It has recently added the Aorus GeForce RTX 3080 Xtreme Waterforce WB 10G to its official product pages. This is a stylish solution which leverages technology we have seen before in Waterforce products. 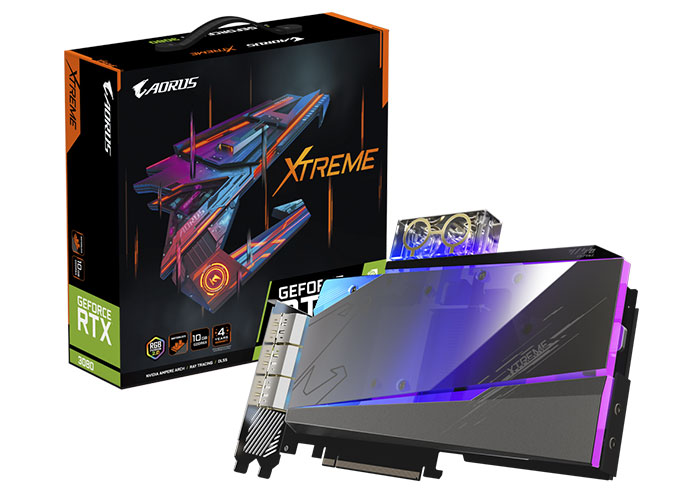 This GeForce RTX 3080 based graphics card comes factory overclocked, with a core boost clock of 1,845MHz (Reference is 1,710MHz, Inno3D GeForce RTX 3080 iChill X3 is 1,770MHz, EVGA GeForce RTX 3080 XC3 Ultra Gaming is 1,755MHz, MSI GeForce RTX 3080 Gaming X Trio is 1,815MHz). Once it is comfortably installed in your system it may be able to be pushed further, but at least Gigabyte / Aorus provides a good new baseline.

The Waterforce solution employed by this card cools the GPU, VRAM and MOSFET, and stands apart thanks to its large copper baseplate, high performance micro fins and optimally spaced microchannels, according to Aorus. Other welcome features include the built-in leak detection system and the ultra durable components supporting the GPU - giving Aorus the confidence to supply a four year warranty. 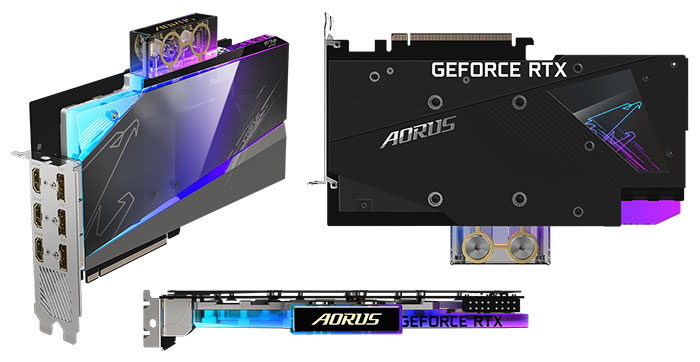 Last but not least the cooling block features RGB Fusion 2.0 lighting. This is controlled alongside serious things like clock speeds, voltages, fan speeds, and power targets - in the Aorus Engine monitoring and tuning software.

We don't have pricing and availability for the Aorus GeForce RTX 3080 Xtreme Waterforce WB 10G at the time of writing.

HEXUS
We don't have pricing and availability for the Aorus GeForce RTX 3080 Xtreme Waterforce WB 10G at the time of writing.

DevDrake
Ehhh, thats a great thing but knowing ekwb it will be priced like FE + new block, so no thank you …

Yeah, like what's the point in paying for this product when I can buy a card with a working air cooler + a separate block for the same price?
Posted by edmundhonda - Tue 03 Nov 2020 14:46

dirtycopgangsta
Yeah, like what's the point in paying for this product when I can buy a card with a working air cooler + a separate block for the same price?

No concerns on warranty, fitting or application? There's value there.
Copyright © 1998 - 2021, HEXUS.net. All rights reserved. HEXUS® is a registered trademark of HEXUS.