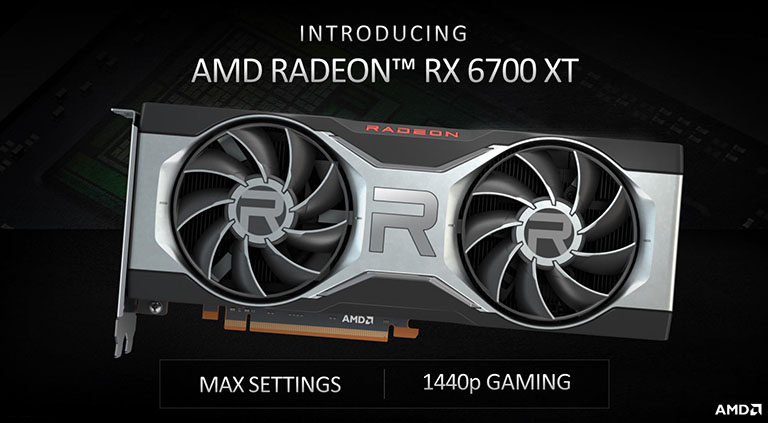 AMD brought some high-end mojo back to the PC graphics card space when it launched the Radeon RX 6800 Series GPUs in November last year. Swiftly followed by the Radeon RX 6900 XT a month later, the three boards use what is colloquially known as the Big Navi die for excellent performance at QHD and UHD resolutions.

Costing $579, $649 and $999 for the RX 6800, RX 6800 XT and RX 6900 XT, respectively, putting the trio squarely in the premium firmament, AMD always planned to release cheaper, not-so-powerful Navi 2x cards destined to occupy the next rung down the pricing ladder and compete against rival Nvidia's larger RTX stack.

Fitting in neatly below RX 6800, the next GPU freshly cleaved off the Navi block is the wholly expected Radeon RX 6700 XT. Available from March 18 onwards in both Made By AMD (MBA) and partner-constructed models, pricing starts at $479.

As an ongoing sign of the times, AMD unveiled the Radeon RX 6700 XT during a stream broadcasted today. We've pieced together as many details as possible and presented the new GPU alongside some familiar graphics cards from AMD's performance stable.

Our guesses are in brackets 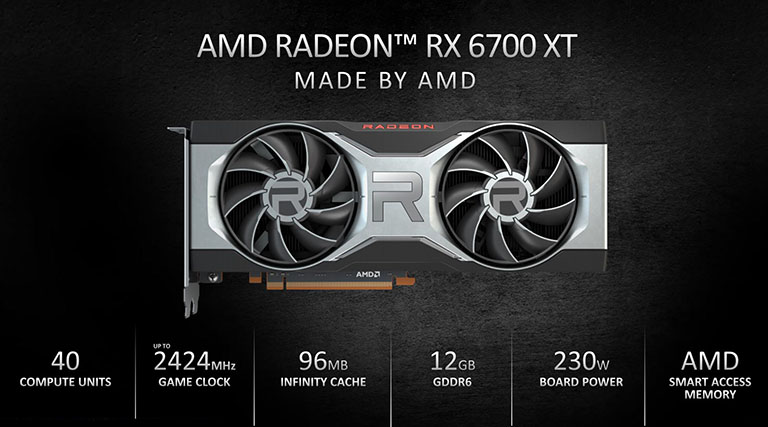 All slides and numbers provided by AMD

AMD's presentation was deliberately light on the technical detail that will be divulged between now and the March 18 official launch date. We know this new GPU uses the same RDNA2 architecture present on the trio of higher-performing boards. We also now know RX 6700 XT is outfitted with 40 CUs, 96MB of Infinity Cache, 12GB of GDDR6 memory, a 2,424MHz Game Clock and total board power of 230W.

Employing the knowledge of how the RDNA2 architecture is built and using these scant few numbers we can extrapolate more detail. Being a 40-CU part means RX 6700 XT is very likely to use a smaller, distinct die than present elsewhere in the RX 6000 Series stack. Known in the business as Navi 22, this GPU is likely to feature 2,560 processors, whereas the next model up, RX 6800, has 3,840. Ensuring RX 6700 XT is no vastly poorer cousin, AMD's decision to ramp up the Game Clock to an impressive 2,424MHz goes some way into pushing up shading performance. We reckon this chip is likely to push around 13TFLOPs once the as-yet-unknown Boost Clock is taken into account.

Elsewhere, the 12GB GDDR6 memory is important as it indirectly infers AMD is using a 192-bit memory bus, instead of the 16GB/256-bit present on the established cards. Even though this GPU features bandwidth-saving goodness of Infinity Cache, AMD remains a champion of larger VRAM framebuffers - rival GeForce RTX 3070 and RTX 3060 Ti make do with just 8GB. The 230W board power feels high for a fourth-rung card but can likely be explained by AMD having such high core frequencies in place. 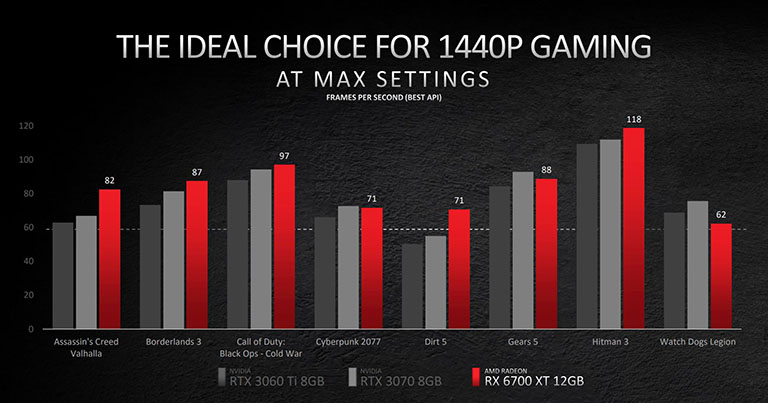 AMD's implementation choices translate to a card that is primed for excellent performance at QHD with all the eye candy bells and whistles turned on. In fact, AMD took the opportunity of comparing the RX 6700 XT's performance against rival RTX 3070 and RTX 3060 Ti across eight titles benchmarked at QHD using the best API for each card.

If AMD's numbers are to be believed, the RX 6700 XT is generally faster than the RTX 3060 Ti and more than a performance match for the RTX 3070. Note that AMD is benchmarking with framerate-enhancing Smart Access Memory (SAM) turned on... so it's not a perfectly apples-to-apples comparison. AMD's not shy at extolling the virtues of the larger memory footprint, either, drawing attention to the advantages of 12GB vs. 8GB in four titles run at QHD maximum settings.

We'll have the full review on March 17, but the key takeaways from today's presentation is that AMD feels confident in pitching the Radeon RX 6700 XT against established performant GPUs from Nvidia's latest RTX portfolio. Questions certainly remain: how well does RX 6700 XT do once ray tracing is turned on? Is there scope for further overclocking given the already-high frequencies?

Circling back to a familiar but painful theme over the past six months, suggested pricing verges on pointless when set against the backdrop of severe stock scarcity. Equally applicable to Nvidia and AMD, only a handful of units for each model have been available at launch, much to enthusiasts' understandable chagrin.

AMD had the following statement regarding stock and availability: 'we hear, and understand, the frustration from gamers right now due to the unexpectedly strong global demand for graphics cards. With the AMD Radeon RX 6700 XT launch, we are on track to have significantly more GPUs available for sale at launch. We continue to take additional steps to address the demand we see from the community. We are also refreshing stock of both AMD Radeon RX 6000 Series graphics cards and AMD Ryzen 5000 Series processors on AMD.com on a weekly basis, giving gamers and enthusiasts a direct option to purchase the latest Ryzen CPUs and Radeon GPUs at the suggested etail and retail price.' 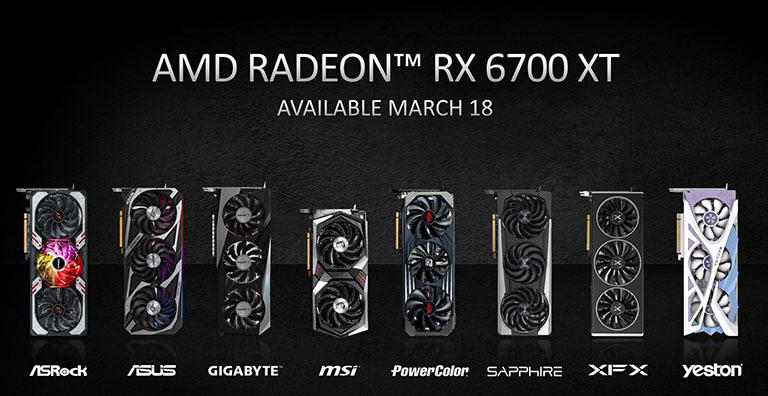 MBA boards will be listed on AMD.com and a slew of partner models at your favourite etailer on March 18.

What do you think? Does Radeon RX 6700 XT 12GB do enough at the purported price point? We'd love to hear your thoughts in the forums.

hexus
Does Radeon RX 6700 XT 12GB do enough at the purported price point?

In the absence of a competitor that has enough VRAM and decent ray-tracing performance at 1440p then probably, yes. Seems like decent ray-tracing is still at least a generation away for these mid-range cards from either team so you might as well focus on rasterisation, and in that respect, this card appears to hit the mark. Reviews will hopefully tell all, however.
Posted by Corky34 - Wed 03 Mar 2021 16:48
Not that you can get one for MSRP but, if MSRP is anything to go by, $20 less than a 3070 doesn't seem great value, then again IDK what sort of price people would put on having a card that's capable of ray-tracing.

Still it's good to know reviews will be going up the day before launch so people won't be buying blind.
Posted by CAT-THE-FIFTH - Wed 03 Mar 2021 16:54
Way too expensive IMHO,especially as UK street prices won't be anywhere near what AMD purports it to be. Also consider this - the 5700XT RRP was $400,so that is a straight 20% increase in price at one tier.

So that will make the RX6700 6GB(apparently it has less VRAM),around £360,which is close to a RTX3060TI RRP. That means even if it is slightly higher in rasterised performance,it will have less VRAM too.

From what i gather the 6700 XT is based on new silicon so I'm not sure how useful trying to draw a comparison would be, then again IDK what new silicon means exactly, i assume it's a different version, maybe a performance version given the higher clock speeds.

Edit: Just checked and i think you may have the 6800 TDP wrong, the article lists it as 250W and the 6700XT as 230, granted relatively it seems to be using more power what with fewer bits & bobs.

Edit, edit: Oh bother you corrected my first edit in your answer, sry. :)