Some reviewers have had their hands on a new GPU from AMD that seems to have flown in under the radar. It is not an entirely new GPU, the Navi 21 XTXH GPU is just a higher binned version of the part that appears in the regular Radeon RX 6900 XT graphics cards (i.e. a hand-picked Navi 21 XTX). This new GPU has allowed PowerColor to rustle up the triple fan cooled Radeon RX 6900 XT Red Devil Ultimate edition, which has higher game/boost clocks than all its other SKUs, even boosting clocks beyond the Liquid Devil. 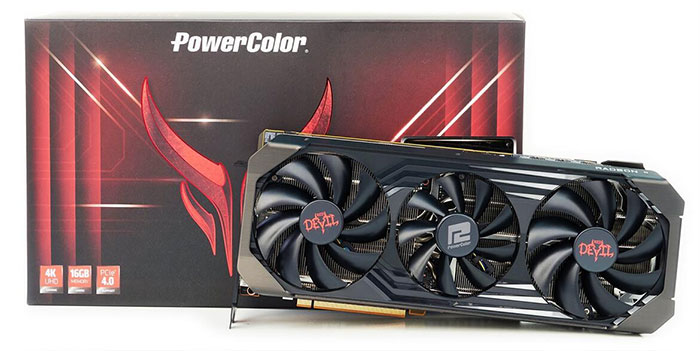 Both HotHardware and Overclocking have had a close look at the PowerColor Radeon RX 6900 XT Red Devil Ultimate edition. The former had these words to share on the new silicon and supporting software from AMD:

"The silicon on this card has been specially binned to ensure stability at even higher clocks than standard cards and the power limit has been increased as well. AMD has also tweaked its software to recognize the more capable GPUs, to unlock higher minimum and maximum clock settings in the Tuning section of its drivers."

In its OC tests HotHardware managed to coax the Red Devil Ultimate to achieve working frequencies of between 2,250 and 2,640MHz.

The French tech site was more adventurous with its OC high-jinks, however it initially bumped against what appeared to be a hard coded 303W limit, so its clocks couldn't be pushed further than the 2,650 to 2,700MHz range. A new BIOS arrived with 330W power limit letting the reviewers run benchmarks at 2,800/2,850 MHz with LN2. Unfortunately some LN2 cooling setup issues and simply running out of time prevented any further tests being documented.

TechPowerUp reckons that PowerColor's Radeon RX 6900 XT Red Devil Ultimate edition is just the first of several similar releases we should see from AMD partners in the coming days.