MSI's web developers seem to have been rather over eager in preparing for an upcoming Nvidia graphics card launch. Twitter based hardware leakster momomo_us spotted that MSI had implemented a 'GeForce RTX 3080 Ti' category in the Nvidia GPU chooser selection menu, which lets you fine tune the product listings. The 'error' has since been corrected and premature references to the RTX 3080 Ti scrubbed away. 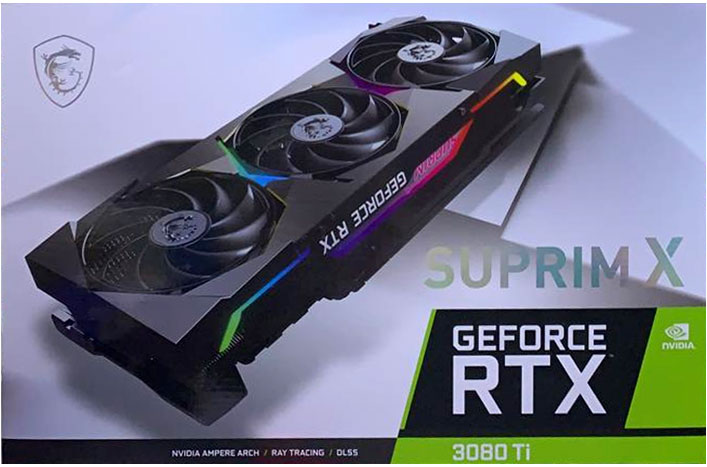 Last week MSI GeForce RTX 3080 Ti Suprim X graphics cards were spotted for sale in a bricks and mortar store in the UAE. Check out the image above, which I've cropped from the original shared on Reddit.

On Tuesday Nvidia launched the GeForce RTX 3050 and RTX 3050 Ti for laptops. It now seems to be much easier to grab a laptop with an RTX 30 GPU than purchase an add-in-card for your desktop PC. Hopefully the situation is going to change and the introduction of 4GB cards like the RTX 3050/Ti could help as they don't seem to be worth investing in to mine crypto due to the VRAM quota and of course slower MH/s. Furthermore, all new and reissued Nvidia GPUs (bar the RTX 3090) look set to include Nvidia's revamped crypto perf-nerf.

Palit is one of the first Nvidia AIB partners to spill its RTX 3050 Ti graphics card plans online, via the EEC – an astonishing 25 in total. It has a plentiful selection of RTX 3070 Ti models listed too (20), and a quintet of RTX 3080 Ti models for those with the deepest pockets. Supporting Nvidia's dedicated mining GPU strategy the maker's filing includes nine 30HX/40HX GPUs, and twelve 50HX/90HX GPUs cards. 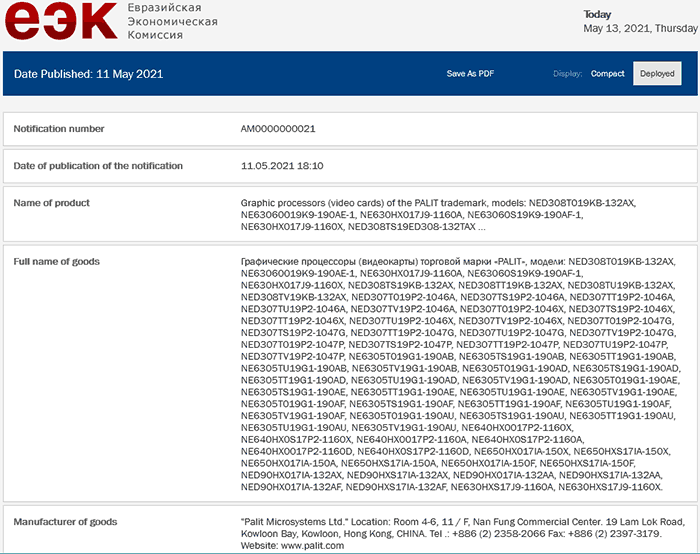 The EEC listing was spotted by Komachi but VideoCardz has added some context to the data splurge by reminding GPU watchers that Palit "often uses different codes for graphics cards being sold in different regions, so each code may simply mean a different packaging or a bundle". In other words, don't expect this many different Palit models to become available in the coming weeks.

Specs for the GeForce RTX 3070 Ti and RTX 3050 Ti seem to be rather uncertain at this time but of course they will fill gaps in the RTX 30 line-up, and you can pin a tail on the donkey in these vacant spec areas.

[GSV
Trig;304]Did we get any hint at actual pricing yet?

Probably a little cheaper than the 3090 and alot more expensive than the 3080… their mission is to sell to the miners whenever it get to it.

The Miners having problems sitting still now!!!
Posted by [GSV]Trig - Thu 13 May 2021 18:57
Will the new 3080Ti's be the new LHR silicon though, in which case they'll be of no use to miners, wonder if I could sell my 3060Ti for enough to get a 3080Ti, I wanted an FE card to start with but if they arent doing one and prices are daft for anything but the FE cards…
I'm away with work a lot over the next 2 months so could sell the 3060Ti now as I wont be doing much gaming while I'm travelling..