As all regular HEXUS readers will know, the first HBM equipped graphics cards will be unveiled by AMD on Tuesday 16th June. This E3 show event, at the Belasco Theatre in Los Angeles, has been heavily trailed by AMD themselves. It is also widely expected to be the event where the 'Radeon Fury' range stablemates of the Radeon R9 300 series are officially revealed.

Just ahead of the weekend, tech site PCPer was sent a quartet of pictures purportedly showing a shiny new AMD Radeon R9 Fury X from a variety of angles. The pictures fit in nicely with all the others we have seen before and the glimpses from AMD's teaser videos etc, so they could well be the genuine article. 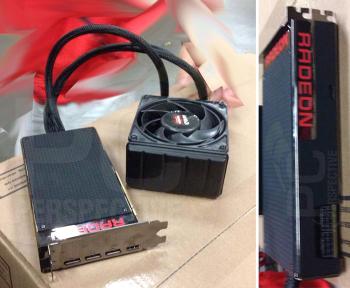 The pictures show a compact graphics card with AiO water cooling system. The substantial 120mm fan/radiator combo is estimated to be about 45mm thick. The shortness of the graphics card allows the design to vector the black braided liquid cooling tubes out of the back of the card.

From what we can see of the hardware there are three DisplayPorts and one HDMI present. The card presents a pair of 8-pin connectors atop of its frame which would allow as much as 375W to course through its veins – but it doesn't mean that much will be drawn.

Let's hope we will find out much more about the Fury X, and a rumoured air/hybrid cooled Radeon Fury card, on Tuesday evening.

Brazilian tech website TechMundo has leaked what appears to be the entire MSI branded AMD Radeon R9 300 series of graphics cards. The top of the range, the AMD Radeon R9 390X uses a GPU codenamed Grenada XT (Hawaii XT), so it's 'confirmed' as not being a Fiji powered card and being a rebrand. 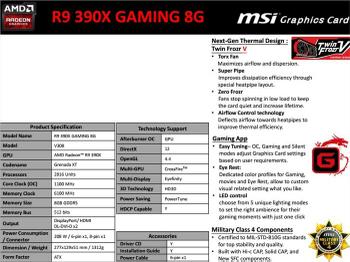 The whole of the R9 300 series follows a similar rebranding scheme. We have expected this would happen since the official OEM R9 300 series were detailed as being rebrands in early May. 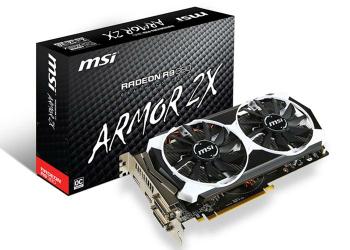 Biscuit
That is one chunky monkey rad!

flearider
so air just wont cut it .. not that I use it ..

well technically it does, the ‘water’ is being cooled by air :p

If anything this is likely more efficient way to cool the whole gpu board (a hot gpu chip maybe) versus the combined air cooler and water cooled options or even just plain air cooled they've done in past.

Is it going to be noisy, quite possible, I can't say I've seen that style of fan used before and that ‘inner rim’ could actually increase noise….