Razer has tipped its hat back into the VR ring by unveiling an update to its Open Source VR (OSVR) project. 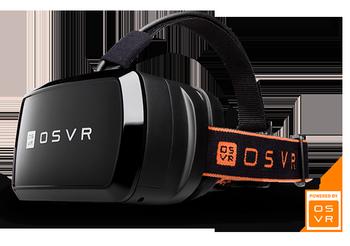 The original Hacker Development Kit shipped with a 1,920x1,080-resolution screen whose vital specs are beaten by the two main players, HTC Vive and Oculus Rift.

But the new announcement isn't just about a specification bump. Razer says it has some Image Quality Enhancer (ICE) technology that's supposed to reduce the screen-door effect which has affected earlier VR headsets. The company did not go on to say exactly what it is doing to eliminate it.

Razer clearly wants in on the burgeoning VR ecosystem and has therefore priced the HDK2 kit appropriately. Understanding that it is a development platform rather than a retail unit such as the HTC Vive, the kit will be available next month at $399, with the original HDK dropping to $299. Fancy a bite?

Razer is never cheap and likely feels like lightweight plastic junk.
Posted by gordon861 - Wed 15 Jun 2016 11:48
Ok so it says this is a DEV KIT not a retail one, but what does that really mean?

If you buy this for about £300 surely it'll still work as a headset? Otherwise it'll be pretty pointless for developing with.
Posted by eiamhere69 - Wed 15 Jun 2016 12:27
Razer usually target the premium end of the market (cost) with budget equipment (quality).

They do occasionally make decent equipment, but for a price
Posted by crossy - Wed 15 Jun 2016 13:04
Another VR device? Colour me unimpressed, I'm seeing more use for AR, whereas headsets like this one seem to be pretty much gaming devices.