Following the introduction of cheaper, smaller and more reliable transistors into the electronics in the second half of the 20th Century it was thought that computers would never look back to the days of ye olde vacuum tube. Such tubes still are popular in some consumer electronics, mainly in audio equipment due to their more natural sounding, audibly pleasing warm characteristics and response. For computers dealing in cold hard 0s and 1s no one cares about such superfluities, we just want more speed. 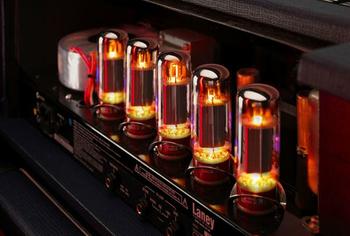 Vacuum tubes are still popular in some audio equipment manufacturing

Solid state transistor speed and size reduction has been moving along nicely over the years but it seems to becoming increasingly difficult to keep up with Moore's Law - doubling the number of transistors on integrated circuits every two years. It's hard to see how things can get shrunk much further in the future to get solid state transistors small enough to be able to follow that path. You can only shrink things down so far before you are left with atoms...

NASA scientists might be onto a speed-boosting solution by re-mixing vacuum tube technology as a vacuum-channel transistor. These components, made using the same process as for modern CMOS parts, use a vacuum* in place of the traditional gate electrode (*the vacuum space was actually filled with Helium gas in the recent tests by the NASA scientists). Importantly this facilitates much faster electron transfer than going through the MOSFET gate. 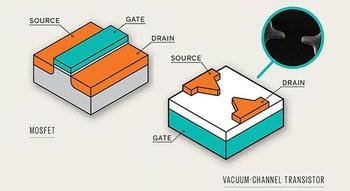 In lab testing the NASA scientists have managed to achieve operating frequencies of up to 460GHz for these vacuum-channel transistors – that's 10 times faster than graphene transistors have achieved so far. It also gives us hope of reaching across the terahertz gap.

Outside of a lab environment there are a lot of other qualities beyond sheer clock speed that will need to be addressed. Will manufacturers be able to pack millions of these vacuum transistors into a tiny area on a single chip, can the operating voltage be significantly reduced and what packaging methods can be used to produce them? These are big challenges but the researchers are said to be both positive and optimistic about progress.

Posted by LeetyMcLeet - Wed 25 Jun 2014 14:46
So our CPU's of the future could be the size of power supplies?
…as long as we can overclock 'em :p
Posted by peterb - Wed 25 Jun 2014 16:30
Well, not thermionic devices, although when transistors were first developed, it was never thought possible that they would switch at more than a few MHz :) And for very high power (MWatts at RF frequencies,) thermionic devices are still top dog - for now.

But, interesting developments to take ‘conventional’ switching technology to higher speeds - and I use the term conventional to differentiate from alternatives like quantum computing.
Posted by g8ina - Wed 25 Jun 2014 18:10
When you consider that ONE valve = ONE maybe TWO transistors ….

You're gonna need a power station just to run DOS.
Posted by peterb - Wed 25 Jun 2014 18:20
Yes, but they aren't really vacuum tubes. No heated cathodes and the current will be tiny, so the heat generation that you got from the kinetic energy of the electrons hitting the anodes at sped won't be there as the transition distance is so small.
Posted by ik9000 - Wed 25 Jun 2014 22:37
well they rely on helium. Another good reason the US government needs to stop selling it off for tupence.