You are here:
Mainboard Cooling News

In May, Asus released a product announcement teaser on Reddit. One of its technical marketing execs revealed that Asus was preparing a ROG Crosshair VIII Dark Hero motherboard with a revised spec. In particular the new Asus ROG Crosshair VIII Dark Hero would feature massive chipset cooling – doing away with the tiny fan installed on currently available AMD X570 chipset boards.

A few hours ago the Asus social media team were busy again, this time on Twitter with a few more details about the planned fan-less X570 chipset boards it has planned for later this year.

According to the post, Asus has lined up the following motherboards for its initial X570 passively cooled revisions: 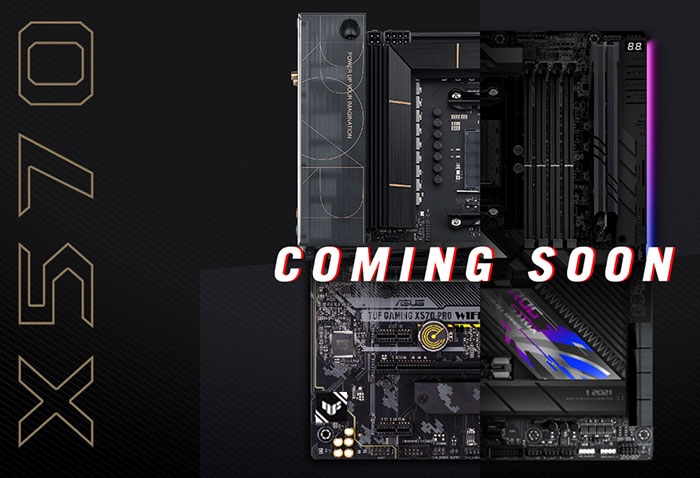 Asus reiterated the intention to distribute the new passive X570 motherboards starting in Q3, and added that they were "coming soon". Calendar Q3 officially starts on 1st July.

At the time of writing we don't know what AMD or its partners have done, exactly, to reduce the heat generated by the chipset. It is possible that the chipset has been revised by its designers, has had some design optimisations, has been manufactured on a more power efficient process – or a combination of these things.

Perhaps other AMD motherboard partners will start teasing their passive X570 products soon, with launch said to be so close.

The last X570 chipset motherboard reviewed by HEXUS was the ASRock X570 PG Velocita, back in January. Previously we have had both the MSI MEG X570 Ace and X570 Aorus Xtreme motherboards in the labs.

Posted by Tabbykatze - Wed 09 Jun 2021 13:20
I do like the minimalist design of the ProArt boards. Especially after the WRX80 they did which look fantastic.

Wendell at L1Techs has the WRX80 and it just looks and works fantastically, definitely a money no object desirable.
Posted by 3dcandy - Wed 09 Jun 2021 13:21
Pretty sure it's a new revision as they have introduced new stepping for a few cpu's recently too
Posted by [GSV]Trig - Wed 09 Jun 2021 13:35
Wonder how long it will be before we get iTX offerings, one less fan in the machine, be nice if they dropped 2.5Gb LAN on there as well..
Posted by Tabbykatze - Wed 09 Jun 2021 13:47

'[GSV
Trig;4293924']Wonder how long it will be before we get iTX offerings, one less fan in the machine, be nice if they dropped 2.5Gb LAN on there as well..

Tabbykatze
ITX boxes with a 2.5gbe would be a boon for small format home NAS'!

Yeah, some of the B550 boards have 2.5Gb, I was torn between that and an X570 board, which is what I finally ended up with for re-casing my home server box..