VESA has announced that it has released version 2.0 of the DiaplayPort (DP) A/V standard. This is the first major update since DP 1.4a (March 2016) and it is headlined as delivering a 3x increase in data bandwidth performance. Thanks to the extra throughput, VESA says that DP 2.0 will enable beyond-8K resolutions, as well as higher refresh rates for 4K/HDR and Virtual Reality applications. But this isn't all... 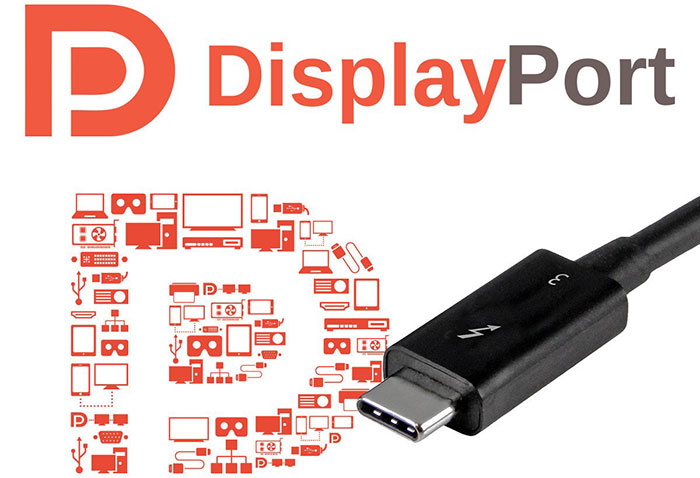 DP 2.0 will be backward compatible with previous versions of DisplayPort. Display devices will be able to be connected though the native DP connector or the USB Type-C connector which carries the DP A/V signal though DisplayPort Alt Mode - and can thus deliver USB data and power too. If this sounds reminiscent of Thunderbolt 3, that is because Intel has contributed the Thunderbolt PHY layer specification to VESA for use in DP 2.0. 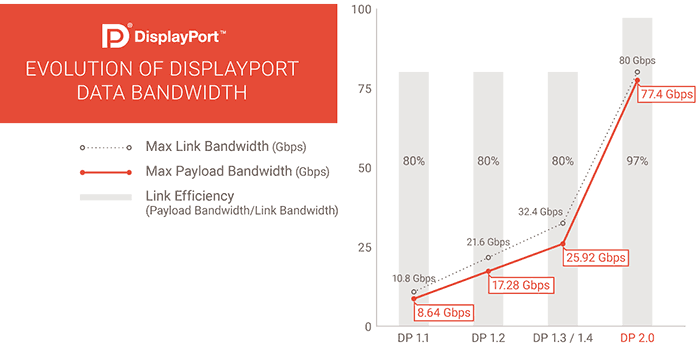 As well as supporting existing DP features such as Display Stream Compression (DSC) with Forward Error Correction (FEC), and HDR metadata transport, the increased (triple) bandwidth will be able to support 8K at 60Hz with HDR support - or even better with DSC on. Below you will find some example DP 2.0 configurations:

When using only two lanes on the USB-C connector via DP Alt Mode to allow for simultaneous SuperSpeed USB data and video, DP 2.0 can enable such configurations as:

Power efficiency is said to benefit with the transition from DP 1.4a to 2.0. The new standard supports VESA's new Panel Replay capability, "which is designed to optimize the power envelope and thermal performance of smaller end devices, such as all-in-one PCs and laptops, with higher resolution displays". This power saving is based upon the efficient feature where the GPU only updates the portion of the display that has changed since the video frame update.

The first products incorporating DP 2.0 are projected to appear on the market by late 2020, says VESA.