Last week HEXUS news featured an updated Samsung Odyssey G9 gaming monitor. The headlining quality of this curved 49-inch DQHD flagship display with faster refresh rates and response times was that it had been VESA certified to the DisplayHDR 2000 tier. This extraordinary HDR rating was assumed to be largely thanks to Samsung's canny use of cutting edge VA screen tech which leverages a Quantum Dot infused Mini LED screen with 2,048 dimming zones.

The above 'leak' came via a listing on the popular Chinese online retail site Taobao, including lots of professionally produced supporting graphics and infographics, some mentioning the specs including VESA DisplayHDR 2000. You can check out some of these in our story, as Taobao now appears to have removed the Samsung listing… 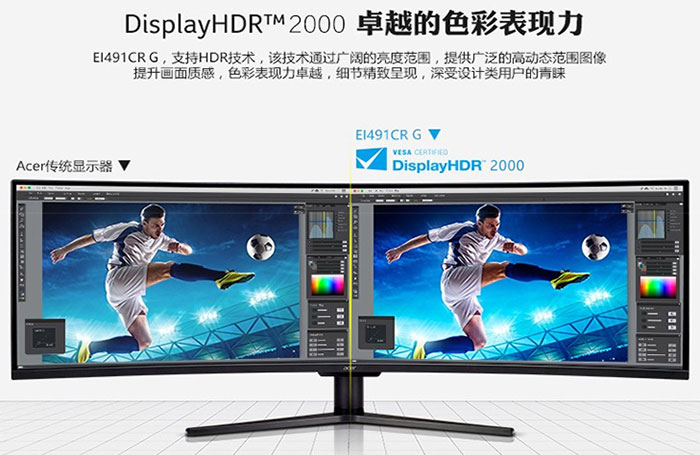 Yesterday several tech sites reported upon another Taobao sourced 'DisplayHDR 2000 certified' listing. The Acer EI491CRG9 49-inch DQHD gaming monitor listing is still live on the Chinese retail site at the time of writing (see ad promo image above) and looks like it offers very similar specs to the above Samsung. It is likely to be based upon the same display panel. The VESA DisplayHDR 2000 certification logo is used in this listing too, in official looking promo graphics.

Yesterday evening HEXUS received an email from a VESA representative complaining about the use of an "illegitimate DisplayHDR 2000 logo". To set the record straight the Video Electronics Standards Association wanted to make clear that "there is no 'DisplayHDR 2000' tier in the VESA DisplayHDR specification and logo program at this time".

Being more specific about the Taobao listings of the Samsung and Acer branded monitors, the association added that "VESA has no knowledge of the origins of the DisplayHDR 2000 logo currently posted on these display listings on the Taobao website". It went on to say that it takes "misuse of our trademarks and logos seriously," and very firmly asserted that claims of VESA 'DisplayHDR 2000' certification are "unapproved and deceptive".

Reading between the lines, however, this isn't a denial that such a tier is going to be announced in the not-too-distant future. "VESA does not endorse the use of this logo unless and until a DisplayHDR 2000 tier has been officially announced by VESA, and any products claiming to meet this tier level have been officially certified by VESA and are listed on our website at https://displayhdr.org/certified-products/."

In summary, this looks like a bit of a storm in a teacup over unannounced products boasting specs/certifications that are also as yet unannounced, and being listed (but OOS or otherwise not available) via a Chinese etailer.

The last update of the VESA DisplayHDR specification was when DisplayHDR 1400 was added in September 2019. Earlier that year VESA introduced the DisplayHDR True Black standard.

Posted by excalibur1814 - Wed 21 Apr 2021 08:39
Everything about HDR is deceptive. It's just another reason to charge people MORE, for what they should just get anyway. Marketing… making stuff up to make companies money. Just make high quality monitors. There's no point in having 50 models. It's a waste of resources!
Posted by Corky34 - Wed 21 Apr 2021 09:25
I must be using HDR wrong because when i enabled it everything looked awful, that was on a monitor that doesn't even reach HDR 400 specs and on the desktop.
Posted by kompukare - Wed 21 Apr 2021 10:45
Why would anyone want it, anyhow?
Imagine you are watching some dark scene (as we know expensive films aim to have 80% of the screen almost totally black) and suddenly this flash comes in at 2000 candela to blind you.
Don't see the appeal.
Posted by tapmybuttons - Wed 28 Apr 2021 12:56
When done correctly HDR can look amazing in games such as Red Dead Redemption 2, Horizon Zero Dawn, Spider-Man, Hitman or Shadow of the Tomb Raider for example. For story driven games and movies it can be appealing but for fast paced shooters it can be hit and miss but nonetheless a welcome addition to newer monitors that are adding HDR 1000 plus. I expect it to be the norm if I'm spending almost £1000 on a monitor and most TV's have it already in the same price bracket but it depends on what you want I guess
Copyright © 1998 - 2023, HEXUS.net. All rights reserved. HEXUS® is a registered trademark of HEXUS.