You are here:
Monitors Peripherals News

VESA has officially released the DisplayPort 1.3 specification, an update to the widely used DP 1.2 standard offering a 50 per cent increase in bandwidth to 32.4Gbps, or 25.92Gbps of uncompressed video data.

Not only can the new standard drive a single 4K display at 120Hz, or dual 4K monitors at 60Hz, it is capable of supporting 5K monitors which display images at a 5120x2880p resolution at 60Hz. It should also be able to handle 8K output, but perhaps not without some lowering of the refresh rate or colour depth. 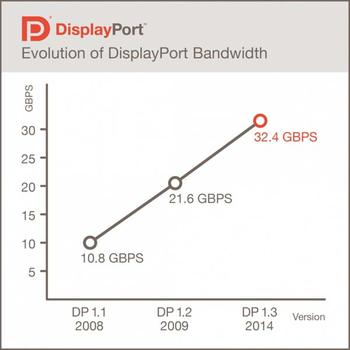 In addition to extra bandwidth, DP 1.3 will continue to support video conversion to VGA, DVI and HDMI, with additional support for HDCP 2.2 and HDMI 2.0 with CEC. It will work with the 4:2:0 pixel structure, a video format said to become the prime standard for future 8K x 4K TV and displays. DP 1.3 has included enhanced multi-function interfaces which gather data transport, A/V transport and other capabilities on a single cable.

"While becoming a mainstream video standard, DisplayPort continues to be at the cutting edge of A/V transport," said VESA Board of Directors Chair Alan Kobayashi, Fellow & Executive R&D Management for DisplayPort Group at MegaChips Technology America. "These new enhancements to DisplayPort will facilitate both higher resolution displays, as well as easier integration of DisplayPort into multi-protocol data transports, which will satisfy consumer’s desire for simplicity and ease-of-use."

The new standard is as usual, offered to VESA members without any license fee, but we are still waiting to see when the first compatible displays and graphics cards will become available.

Posted by KeyboardDemon - Tue 16 Sep 2014 14:55
As far as I could tell, there's nothing in there with regards to FreeSync or indeed about when we are likely to see monitors and GPUs that are DP 1.3 compliant. Still it looks like things are moving in the right direction.
Posted by Dottorrent - Tue 16 Sep 2014 15:04
Praise the lord, 4K gets 120hz… for an extra £1000
Posted by MrRockliffe - Tue 16 Sep 2014 15:29
I'm most interested in freesync compatability - if it requires an amd card I'll happily switch! Won't need stupidly expensive monitors with TN panels.
Posted by xslavic - Tue 16 Sep 2014 17:50
Good,hope to receive firmware updates soon.
Posted by NitrousX - Tue 16 Sep 2014 18:10
I would like this feature but I've heard from AIB manufactures on Nvidia's GTX 900's currently only have support for 1.2v hopefully down the line they'll bring out revised versions soon