ASUS Republic of Gamers has been showing off its appealing Claymore gaming keyboard at various trade shows for quite a while now. We first saw it at Computex Taipei, back in June last year, then it was also featured in the ASUS 'Gaming Innovations' showcase at CES 2016 last week. Now the firm has published a teaser video on YouTube showing off the keyboard's lighting effects and its pièce de résistance, a detachable numeric keypad.

The ASUS ROG Claymore will be made available with the usual choice of popular Cherry MX mechanical keyswitches, Red, Blue, Brown, and Black options. Other features boasted by this keyboard and seemingly popular with the gaming community are; 16.8 million colour RGB LED customisable backlighting, configurable keys and macros, and N-key Rollover technology. ASUS has also implemented ROG motherboard sync technology, allowing the control of such motherboard attached fans, hotkey OC and BIOS access and more. Keyboard strength and rigidity is implied thanks to the "durable aluminium-alloy frame" under the Mayan-inspired outer case design.

As mentioned in the intro, the detachable keypad is the star attraction of the ROG Claymore. Its flexible placement options will appeal to those wishing for a left-handed numpad, or a satellite numpad configuration. The numpad keys can be assigned functions and macros easily. 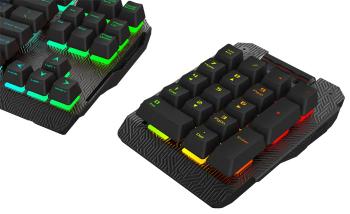 ASUS ROG is likely to launch a new mouse at the same time as the Claymore: the ROG Spatha wireless/wired gaming mouse. This is an 8200 dpi laser mouse "crafted for MMO glory," and featuring 12 programmable buttons, Omron switches in a socket design, and RGB lighting, all built around a magnesium-alloy chassis.

We haven't any indication of pricing or firm launch dates for either of the above yet, but the ROG Spatha mouse was described by ASUS at the CES as a "soon-to-be-released" product.

Read inside for more info about the latest HP Omen keyboard, mouse and headset.

51 QOTW: Do you wear a smartwatch?

I've ditched mine in favour of a regular wristwatch. What about you?