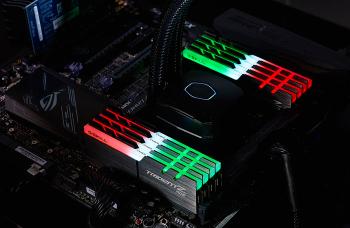 Customer feedback for the original Trident Z RGB memory series in December was apparently good but users wanted higher capacity options. Thus G.Skill has worked hard to deliver memory kits featuring high performance DDR4 16GB RGB modules. It's also produced a new Trident Z RGB video trailer to show its kits of as many as 8 memory modules pulsating in sync with each other; in coordination with other system components, and in time to music, for example. In the video, embedded below, you can see the Trident Z RGB memory modules in action inside an NZXT chassis / cooler system based around an Asus Rampage V motherboard.

The full new product matrix tabulating top frequencies supported, timings and capacities is provided above. These XMP 2.0 supporting kits are scheduled for release next month. Pricing is yet to be announced but buyers will receive a limited lifetime warranty on the memory modules.