Mushkin plans to launch one of the highest capacity SSDs on the market at an unbeatable price, according to The Tech Report. A solid state drive prototype was showcased at the CES 2016 last week which offered a capacity of 4TB at an estimated retaili price of $0.25 per gigabyte. This US$500 drive is said to be destined for market in Q2 this year.

At the CES Mushkin said that its 4TB drive would be basically made up of two of its new Reactor 2TB SSDs on a single PCB. The drives would be joined by JBOD onboard RAID config and be seen by your system as a single volume.

The new Mushkin Reactor drives utilise 15nm 3D MLC Flash and updated Silicon Motion SM2246EN controllers which can address up to 2TB of storage apiece. Individually such drives can provide speeds up to 560MB/s read and 460MB/s write, however the JBOD joined 4TB device suffers quite a drop in access speeds. The Tech Report says that the conjoined drive offers only about 10K IOPS so would be best suited to applications such as video recording or bulk media storage. To illustrate the drop in IOPS caused by JBOD, last year's 1TB Mushkin Reactor achieved about 75K IOPS in tests. 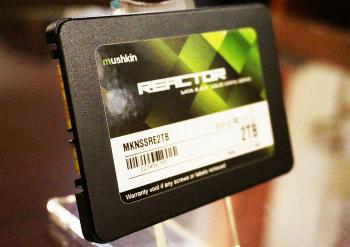 Posted by outwar6010 - Tue 12 Jan 2016 13:41
My new steam drive. I would also like a 3.5" variant where they jam in as much as they could.
Posted by scaryjim - Tue 12 Jan 2016 13:48
It may “only” do 10k IOPS, but that was fairly standard for early consumer SSDs, and is still a couple of orders of magnitude better than spinning rust ;) At 4TB I'd use one as my main system drive more than happily… :D
Posted by The Hand - Tue 12 Jan 2016 13:57
Prepared to be bombarded with emails from retailers trying to sell off smaller capacity SSDs! This 4TB would go nicely in a new 4K build with a 2016 gpu and cpu.
Posted by smargh - Tue 12 Jan 2016 14:34
Oooh. There is a market for this - slow, large capacity, but hopefully reliable, and run cool. Obviously endurance might perhaps be of concern, but that might be less of a factor where the data doesn't really change much over time.

I have four 2TB drive in RAID1 which are noisy, are awkward to keep cool in a hot room, and the slowness compared to my SSD is really annoying. Two 4TB SSDs would replace them perfectly. Hopefully they wouldn't need much in the way of cooling.

Perhaps they could brand them as an “Archive SSD”, as Seagate does with their high-capacity-cool-running-spinning-rust drives.
Posted by shaithis - Tue 12 Jan 2016 14:50
“Only 10k IOPS”