Western Digital has launched what it claims to be the world’s fastest 256GB microSD card. The SanDisk Extreme branded memory card is said to be perfect for 4K recording smartphones, high performance drone, and action camera users. This sizable memory card could be useful for recording as much as "14 hours of 4K UHD video" and, thanks to the record breaking transfer speeds, can save users valuable time when it comes to transferring the files for editing or archiving. 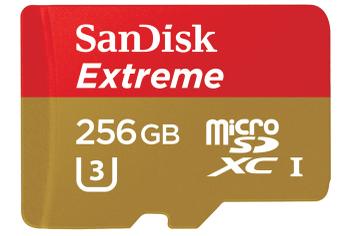 According to SanDisk's own tests, the 256GB SanDisk Extreme microSDXC UHS-I card delivers unmatched transfer speeds of up to 100MB/s, allowing users to save time transferring large files, as well as write speeds of up to 90MB/s for rapid capture of photos and/or high resolution videos. Remember the transfer speeds of data between the memory card and your computer will be impacted by your card reader and interface. 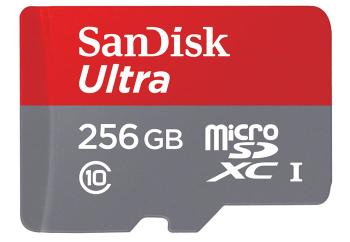 If you are interested in either of the new 256GB microSD memory cards you will be happy to know that both are waterproof, temperature-proof, shock proof, and X-ray proof. For storage management and backup on mobiles and tablets users can download the SanDisk Memory Zone app for Android via Google Play.

Posted by semo - Wed 29 Jun 2016 20:12
How can they claim it is the fastest when no IOPS stats are quoted. Some of us use these in smartphones where seq. speeds don't matter much
Posted by chinf - Wed 29 Jun 2016 22:54
The Extreme card is marked prominently with the U3 symbol, which should mean it's rated UHS-3 not UHS-1. Shurely shome mishtake?

Update: https://en.wikipedia.org/wiki/Secure_Digital#Speed_class_rating - it's UHS-I Class 3, meaning minimum 30MB/s serial write speed; not the UHS-I class 1 minimum 10MB/s serial write speed.
Posted by gregzeng - Thu 30 Jun 2016 06:08
Engineers who design these mSD cards do not consider how we end-users like our cards to be labelled.
The color of the cards might best indicate the speed rating. The printed sizes should be at the tiny short-end that is visible when the card is visible, mounted in the card-holder.

At the moment, the only way to determine quickly which card is which, is to try to use the gadget's software, or physically (& tediously) remove-eject the card from the card-holder for visual examination.
Posted by Calum - Thu 30 Jun 2016 11:18
I'm just amazed at the price of something so small and insignificant.
Posted by Clubman - Fri 01 Jul 2016 13:27
Sonys's better.