You are here:
Graphics Laptop Reviews

On the face of it, an external graphics enclosure for an Ultrabook makes perfect sense. Mating a high-performance GPU via Thunderbolt 3 brings proper gaming into play, and today's latest external boxes can cater for best cards on the market.

The Asus XG Station Pro aims to bring this external graphics goodness without making a styling fuss. Well-built, attractive, and reasonably compact due to an external PSU, installation of even a GeForce GTX 1080 Ti is a cinch. Lighting is muted, cooling is reasonable, but one concern is with the lack of connectivity present on the back. Surely a unit such as this deserves to have Ethernet capability at the very least?

Performance is still some way off a decent desktop system, though, and the lower-resolution framerate drop-off is in obvious evidence on some titles, but that's the clear trade-off when connecting over Thunderbolt 3 to a lower-wattage CPU. In this regard, the XG Station Pro performs entirely as expected.

The market for external GPU enclosures hasn't really taken off, most likely due to the high cost. Priced at £300 and primed for practically every graphics card, the XG Station Pro is a step in the right direction, though we do wish it would provide more connectivity and, for that matter, charge an Ultrabook at the same time. 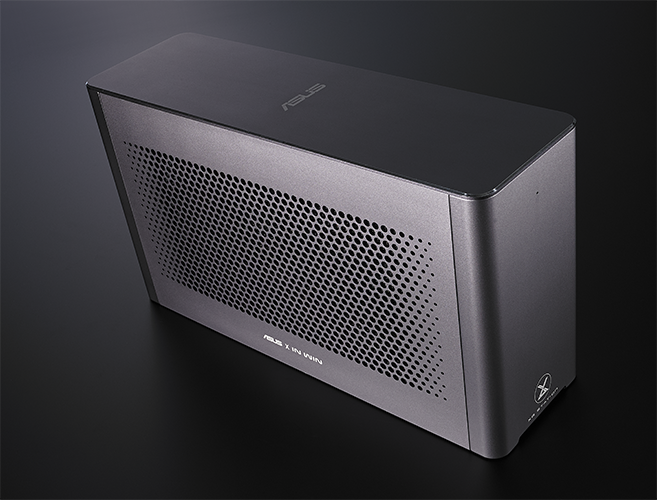 The approved list seems somewhat strange because the housing accepts 300mm-plus PCIe x16-connected cards that take up to 2.5 slots. In other words, practically every card under the sun.

Seems an odd statement to make when you used a card that was on the approved list (an nvidia card later than a 900 series). The AMD supported list seems very much more restricted, would be good to know if this was for real and only those three models are supported.

Got any AMD cards in the Hexus Labs you could do some testing with to validate this?
Posted by DanceswithUnix - Wed 04 Jul 2018 16:31
£300 seems like money better put towards an ITX board, PSU and case you can plug that graphics card into with a similar footprint and ditching the laptop.
Posted by CAT-THE-FIFTH - Wed 04 Jul 2018 17:08
Is the lower scores down to less PCI-E bandwidth or the fact the laptop CPUs are lower clocked?

CAT-THE-FIFTH
Is the lower scores down to less PCI-E bandwidth or the fact the laptop CPUs are lower clocked?

I was assuming both of those. TDP effects are probably quite a big thing too, a desktop can easily have half a kilo of heatsink and 25mm deep fans, laptops just can't soak or move heat the same.
Posted by EvilCycle - Wed 04 Jul 2018 20:22
86C, no thanks!!