Speed is addictive. Kingston runs with this thought by releasing the world's fastest USB pen drive known as DataTraveler Max.

Available in capacities of 256GB, 512GB and 1TB, the headline-grabbing spec is the 'up to 1,000MB/s read and 900MB/s write,' making it, by our estimation, the fastest pen drive on the market.

Kingston achieves such lofty numbers by pairing up a DRAM-less Silicon Motion SM2230 controller to 3D TLC NAND. The controller interfaces with USB-C via a 3.2 Gen 2 interface which peaks out at that 1GB/s sustained transfer claim.

The 1TB DataTraveler Max looks otherwise like a regular, albeit thin, pen drive. Measuring 82mm long, 22mm wide and weighing 12g, Kingston uses a simple retracting mechanism to safeguard the small USB-C connector when not in use. The grippy surface enables opening and closing with one hand. A feint blue LED, to the right of the Kingston logo, pulses when reads and writes take place. 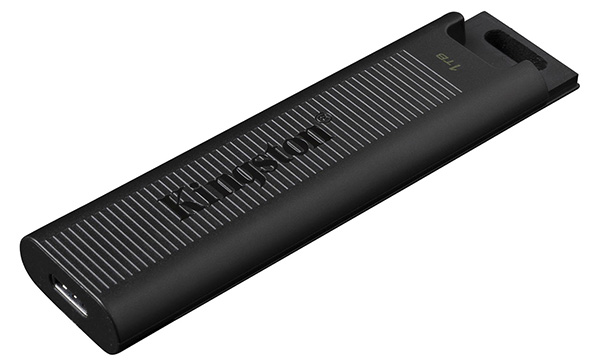 Thoroughly premium in specifications, DataTraveler Max doesn't exude great build quality. A plastic chassis feels somewhat cheap and, connected to a desktop computer, there's worry that an errant hand might be enough to damage or break the connector.

It gets warm, too, with the backside registering 62°C after 10 minutes of load. A metal body, acting as a heatsink, would have been preferable, as would a bundled Type-C-to-Type-A connector and some form of baked-in security. Most of these foibles can be ignored if speed does indeed cut the mustard. Identified incorrectly as a SATA/600 device, Kingston/SMI is coy on the actual protocol, though it is unlikely to be NVMe.

Digging further, Kingston says "“Since the technology and therefore the components being used are very new, we have been hearing that several test platforms, such as CDI, have not been updated to accurately list the information of the drive. However, we can confirm that the DTMAX is a USB 3.2 Gen 2 flash drive and does not use SATA or NVMe.” From such a statement we can intimate it is using CDI. 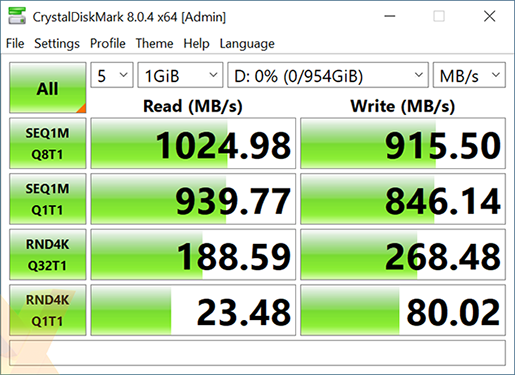 Whatever the conduit, synthetic results are impressive. The drive achieves over 1,000MB/s read and 900MB/s write in the standard CrystalDiskMark test.

Moving on to real-world files, we recorded an average 701MB/s read and 656MB/s write when transferring 80GB comprising 31 large files. Switching gears out to the same 80GB across 4,000 files results in average transfers of 512MB/s and 448MB/s, respectively. Do note that performance does drop-off at around the 90GB mark - to 115MB/s or so - as the write cache becomes swamped and transfer potential degrades.

Overall, though, performance is about the same level as USB-connected standard drives from the likes of SanDisk or WD, so it is reasonable to consider this pen drive as being a good proxy for cabled models.

Priced at £140 for a 1TB stick that's backed by a five-year warranty, the cost of entry remains higher than a traditional external SSD, which brings us on to the question of why you would consider a pen drive over a regular, portable drive? The arguments for include no faffing around with cabling and being even more compact and pocketable.

The introduction of the DataTraveler Max serves as a reminder that whilst Kingston is generally a conservative company in terms of product launches, every so often it has the ability to surprise with a cutting-edge bit of kit.

Most will opt for an external SSD as capacity approaches 1TB, but if you want to have what we believe to be the fastest USB pen drive around, the Kingston DataTraveler Max is it.

I had no idea of the word ‘foibles’, now I do and now it's imperative I find a way to use it…