This HEXUS.help guide discusses Intel’s 45nm process technology. What it is, what it provides, and how it benefits the consumer.

What is a die shrink?

Every once in a while, a processor manufacturer will undergo a die shrink. The shrinking process, popular among semiconductor manufacturers, involves creating near identical circuitry using a more advanced fabrication process.

In simple terms, it literally means making a processor smaller, whilst retaining performance and functionality. By doing so, manufacturing costs are reduced due to more processor dies being manufactured on the same piece of silicon wafer. This in turn will result in increased revenue through greater number of products sold.

What is Intel’s 45nm process technology?

Intel describes its 45nm high-k silicon technology as one of the biggest advancements in fundamental transistor design in 40 years, what makes it so significant? Let’s take a look. 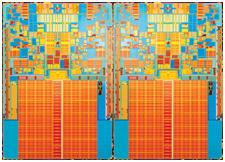 Intel’s hugely popular processor line-up, headed by the Intel Core 2 Duo and Intel Core 2 Quad, have been manufactured on a 65nm process ever since they launched in mid-2006. Now, a little less than two years later, Intel is making a move to a smaller 45nm manufacturing process.

To put things into perspective, that’s more than 400 million transistors for dual-core processors and more than 800 million for quad-core. Intel’s 45nm technology provides up to 50 per cent larger L2 cache and superior energy efficiency to its older 65nm predecessor whilst delivering more than a 20 percent improvement in transistor switching speed, and reduces transistor gate leakage by over 10 fold.

What does Intel’s 45nm process mean to the consumer?

We’ve established that Intel’s 45nm process is hugely important to Intel, but how does it affect the consumer? 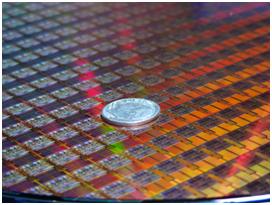 What’s next for Intel’s die size?

In keeping with semiconductor manufacturers’ die-shrinking process, Intel’s 45nm process technology will be superseded with its forthcoming microarchitecture, codenamed Nehalem. Nehalem, however, is for another day, and another HEXUS.help guide.

Our first look at the 'S' version of AMD's best mainstream chipset.