By the second half of 2011 Intel and AMD will have migrated their mainstream and low-end laptop and desktop processors to design architectures which integrate both the CPU and graphics-core on to one chip. The reason for this integration rests with reducing costs and, ultimately, covertly tying a customer in to a particular brand.

But genuine performance processors will retain the CPU-only design that's been prevalent for the last 30 years. This is because high-performance CPUs, equipped with many cores and huge on-chip caches, require considerable transistor budgets of their own, effectively precluding the use of die-space for graphics. What's more, premium graphics cards, housed on separate boards, now ship with billions of transistors, necessitating the use of massive coolers: it's economically unfeasible to have a powerful CPU and GPU on one chip.

Put simply, if you want a high-performance PC then the only avenue open is to use a chip that solely integrates CPU cores. Space is also needed for add-in graphics cards which slot into a motherboard. High-end PCs tend to be large, power-hungry and need a powerful supporting chipset to link the various elements contained within.

Chip-maker AMD is gearing up for a busy summer of launches by releasing a new motherboard chipset known as 990FX. It's notable insofar as 990FX supports what's known as the AM3+ socket, and this is exciting because only it officially provides a home to the soon-to-be-released AMD Bulldozer high-performance processor. More precisely, AM3+ supports the upcoming eight-core desktop variant of Bulldozer, known as Zambezi, which is designed to compete against the very best desktop chips from Intel.

The need for upgrading the existing AM3 chipset rests with the additional power circuitry and associated frequency management of the Zambezi chip. But AM3+ is also backwards compatible AM3 CPUs, meaning it becomes a viable purchase for a fairly wide range of existing AMD customers. Indeed, most AMD desktop chips released in the last two years should work just fine on 990FX.

Other than the obvious support for the premium Zambezi CPU, 990FX's topology is largely identical to 890FX's - a chipset launched a year or so ago. This equates to a two-chip solution - northbridge and southbridge - with a total of 42 PCIe lanes for peripheral expansion, of which 32 are reserved and used for graphics in numerous GPU configurations - including two cards at x16, x16 or four cards at x8, x8, x8, x8. The remainder is arranged as a x4 slot and a further six are dedicated to running PCIe x1 components. What this really means is that 990FX is suitable for running a high-performance CPU, multiple video cards and a slew of high-speed peripherals that use a PCIe interface.

A trick up its sleeve

Though 990FX is largely the same as 890FX, save for Zambezi AM3+ support, the new chipset has a tasty trick up its sleeve. AMD's arch-rival NVIDIA appreciates the merit of the upcoming Zambezi chip and reckons it's high time that it licensed SLI technology on select 900-series boards. Yup, that's SLI on an AMD chipset, and the same lane configuration is available for both AMD and NVIDIA add-in cards. 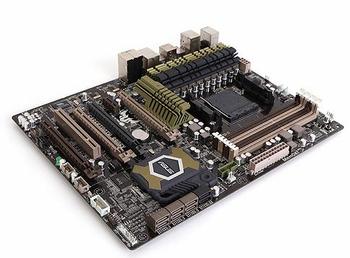 Here's an ASUS 990FX TUF motherboard. Its layout is indicative of what to expect on retail motherboads based around AMD's latest enthusiast-grade chipset. AMD has integrated SATA 6Gbps ports into the chipset. Six of those ports, beige in colour, are shown at the edge of the board. This means the board is ready for the latest generation of solid-state storage that uses this interface.

990FX is strong on providing a large number of PCIex16 slots for graphics cards. This high-end board can take in four cards, either from AMD or NVIDIA, and, as discussed above, run them in various multi-GPU setups.

While not integrated into the chipset itself expect all 990FX boards to feature USB 3.0 connectivity, lots of fan-headers for cooling, and an advanced BIOS based on the new UEFI design. This will enable enthusiasts to enjoy an OS-like feel when setting parameters in the BIOS. 990FX boards, too, will be rife with options to overclock practically all facets of the system.

AMD's 990FX chipset is an evolution of the 890FX that has been doing the rounds for a year. Now primed with explicit support for the upcoming eight-core Zambezi enthusiast chip, together with NVIDIA's SLI certification on certain motherboards, AMD's high-end desktop roadmap looks strong for the remainder of 2011.

Current retail listings show that 990FX boards start from £120. The price of eight-core Zambezi processors is unknown right now, but should they chime in at levels close incumbent six-core Phenom II X6s, which would fit in perfectly with AMD's current value-conscious thinking, then the chip-maker may well have a winner on its hands.

Microsoft said it wouldn't be supporting pre-8th gen Intel CPUs, but this move gives some hope.