A report published by French language tech site CowCotLand asserts that the AMD Radeon VII has been declared as 'End of Life' (EOL). The site was inspired to probe the status of this 7nm Vega GPU-based graphics card after it noticed stocks of Radeon VII cards were running low, were not being replenished, or seeing that it was removed from price lists at local PC hardware outlets. Furthermore, the site said that remaining stocks "had exploded in price". 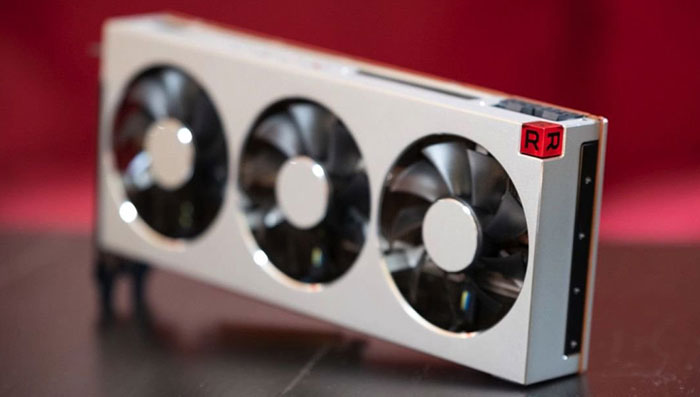 CowCotLand has received 'confirmation' about its initial hunch that the AMD Radeon VII had declared 'end of life', but unfortunately it doesn't mention whether this source was a retailer, distributor, or someone from AMD.

As a reminder, HEXUS reviewed the AMD Radeon VII as recently as this February. The Vega 20-based card was heralded by AMD as the world's first 7nm gaming GPU at launch. Its GPU includes 3,840 shaders and runs at a peak GPU clock of 1.8GHz. Accompanied by 16GB of HBM2 memory, this card was quite power thirsty and noisy under load and the editor concluded it was hard to recommend the £680 Radeon VII for gamers - in the face of Nvidia and its partners' more efficient, raytracing processor augmented, RTX 2080 offerings.

People have been asking about custom cooler design Radeon VII graphics cards but it looks like these won't materialise now the reference card is seen as a dead-end. The BOM of the Radeon VII may well have made it prohibitive to price much lower to sell off stock, so this quiet EOL decision, apparently made almost a month ago, looks canny.

Looking around the UK online retail space there still seems to be stock available, I don't see prices pumped up to rarity levels, but there isn't evidence of a great abundance. It is likely we will see updates to this Radeon VII EOL story over the weekend, for now take it with a pinch of salt.

Posted by lumireleon - Fri 12 Jul 2019 13:48
VII is not for gamers…its for content creators
Posted by Tabbykatze - Fri 12 Jul 2019 14:19
I got ar-say over Nvidia EOL-ing the standard RTX range and that was because there was no sensible reason for them to do that except because they superceded themselves and needed more aggressive price points.

The R7 wasn't ever meant to exist, it what brought to life simply to have something because Navi was delayed and was a low volume earner.

It's a shame it was so expensive because it is a fantastic compute card.
Posted by DanceswithUnix - Fri 12 Jul 2019 14:40

Tabbykatze
The R7 wasn't ever meant to exist, it what brought to life simply to have something because Navi was delayed and was a low volume earner.

It's a shame it was so expensive because it is a fantastic compute card.

I always assumed the chip was intended for AI work and the tpu in the 2080 killed the market for it with a better product. At that point they could either chuck them in the bin, or sell the silicon to gamers.
Posted by SHSPVR - Fri 12 Jul 2019 15:56
Ok so rumour has it the Radeon VII has been declared end of life well that no surprise when you take in count on how much it cost vs. Radeon RX 5700 XT which almost just as fast at $270 less even the 50th Anniversary Edition GPU is bargain.
Posted by darcotech - Fri 12 Jul 2019 17:40
So it is time for 58xx series?