The CEO of Arm, Simon Segars, has penned a blog post celebrating and taking measure of Arm's achievements over the last three decades or so of its existence. The headline is that Arm partners have shipped 200 billion chips. This is quite an achievement, and it doesn't look like the rate of production is going to slow down - this extremely large quantity is growing by nearly 900 new chips per second in 2021.

In the blog post, Segars reminisces about the "trajectory of consumer electronics forever," during the age of the GSM mobile phone. Probably the most iconic name of that era, Nokia, adopted Arm processors for its increasingly complex offerings, and processors like the ARM7TDMI "led to a wave of interest in Arm across the accelerating technology sector," noted Segars. "It undoubtedly secured our position in mobile computing." Of that chip alone, more than 10 billion were produced - as well as being used in mobiles, they were adopted by makers of PDAs and handheld consoles. Surprisingly, there are still use-cases for the ARM7TDMI and partners used 200 million of these processors in 2020.

The biggest Arm processor shipments nowadays aren't the newest and most powerful Cortex-A chips, nor old stalwarts like the ARM7TDMI (inset, above left). Segars explains that the most popular Arm chips are ultra-energy-efficient Arm Cortex-M microcontrollers "which account for three-quarters of Arm-based chip shipments annually and almost half of the cumulative 200 billion chips deployed to date".

Interestingly The Arm CEO relates a story about people (presumably tech experts and analysts) telling him that when the first Cortex-A processors were launched back in 2005, that it was "highly unlikely" mobile users would want to browse the Internet on their phones. A significant shift took place at around this time in mobile history from feature phone dominance to the slab-like touchscreen devices that dominate today. The drive for every richer content on these pocketable screens led to developments like the first 64-bit Arm architecture, Armv8, and big.LITTLE architecture. 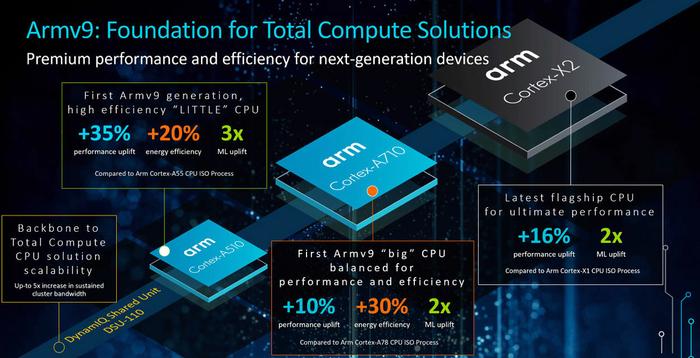 As Arm passes the 200 billion units shipped milestone, it is fun to look back on prior significant achievements; it passed its first cumulative 1 billion chips milestone in 2002, for example, and the 100 billion units milestone was sailed past five years ago – so you can see the rate of uptake accelerating.

Looking towards the future, Arm says that its next two highest performance processors promise major progress and will deliver "up to a 30 per cent generation-to-generation performance uplift without increasing energy consumption". Furthermore, the chips of tomorrow will be "more secure, more environmentally friendly and foundational in enhancing the quality and quantity of our lives," reckons the Arm CEO. Last but not least, it must be good to see Arm's next gen processors are being designed on Arm-based computers – data centres powered by AWS Graviton2 processors.

though that also says they have shipped 2.5B RISC-V “IPs”. Now that might mean cores, and perhaps you can divide by 4 to get the number of chips, but that would still be magnitudes more than I was expecting.
Posted by ohmaheid - Fri 22 Oct 2021 12:17
Sad reflection of the modern world, when you consider more than half are now landfill.
Copyright © 1998 - 2023, HEXUS.net. All rights reserved. HEXUS® is a registered trademark of HEXUS.