An inflection point has been reached regarding the popularity of smartphones in the US, as opposed to boring old feature-phones.

New figures from Nielsen show that in May, 55 percent of those surveyed, who had bought a new phone in the previous three months, went for a smartphone. A year ago that figure was 38 percent.

This presumably marks the point of no return in the US, when the smartphone became the default phone genre. It would be surprising if the figures weren't pretty similar for the UK and much of Western Europe too. 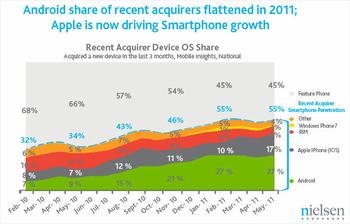 Android is much more popular in the US than in Europe though, and accounts for 38 percent of all smartphones sold over there. Having said that, the iPhone has had a stormer in the past few months, probably due to its launch on the Verizon network. The biggest casualty has been BlackBerry. 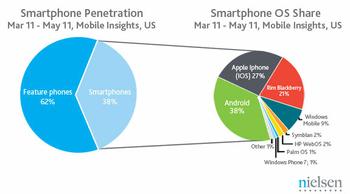 Posted by Biscuit - Thu 30 Jun 2011 22:30
well duh… smartphones are becoming cheaper and easier to manufacture. What you would have spent on a decent feature phone a few years ago you can buy a decent smartphone for now.

These reports make it out like the people are changing their tastes when in reality its just a maturing market. Phones are becoming smart the people stay the same. Moores law baby!
Posted by 3dcandy - Fri 01 Jul 2011 09:14
is RIM the new Nokia?
Copyright © 1998 - 2022, HEXUS.net. All rights reserved. HEXUS® is a registered trademark of HEXUS.