Above you can see a summary table for the quarterly and annual results just published. It is quite a good custom table from AMD's presentation as it breaks down the firm's operating segments too. General financial highlights from AMD are bullet pointed below: 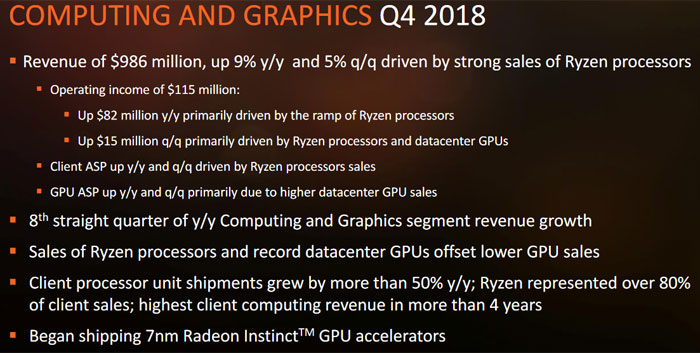 In a post-results conference call, Dr Su boasted of new products gaining market share and significantly boosting the gross margin. This lead "to our most profitable year since 2011," highlighted the AMD CEO. On the topic of GPUs, Su admitted "near-term graphics weakness," due to a stall in crypto demand (in Q4 such sales were said to be negligible). With AMD Navi introductions planned for later this year, hopefully things will pep up for AMD in this segment.

AMD enetered its 7th agreement with GLOBALFOUNDRIES Inc. (GF). As you can see in the presentation slide above, AMD gains the flexibility for wafer purchases from any foundry at the 7nm node and beyond, without any one-time payments or royalties to GF.

EDIT: No, learn to read.
Posted by Luke7 - Wed 30 Jan 2019 11:57
Excellent news, not only for AMD, but for all PC enthusiasts including hardcore Intel fanboys. Why? Well, I'm preaching to the choir on this one, but competition is a tremendous force for good performance and price wise in the tech industry!

Personally, I absolutely cannot wait for a 3000 series (PLEASE!) APU to replace my ageing A10-7870K :)
Posted by nobodyspecial - Wed 30 Jan 2019 22:28
28mil…LOL. That isn't going to catch NV/Intel. Start charging more, as I said before MARKET SHARE means NOTHING without margin on that share. Down from 150mil the year before too, not a great direction. Still I have faith they'll make some decent money once 64c server chips hit. NO faith in gpu/apu, and for good reason as we see here. They can't seem to launch a product without a price war too, so no NET INCOME until servers hit at 7nm. If they wake up and start charging correctly, maybe income goes UP. This is worse than I even thought they'd do, I thought they'd make ~100mil at least. Not that happy as a shareholder here.
Posted by scaryjim - Wed 30 Jan 2019 22:38

nobodyspecial
… Down from 150mil the year before too …

Read the chart again. It's up 30 million from the year before - in this quarter last year AMD made a 2 million loss. It's down from the previous quarter, but ALL tech companies have seasonal cycles. It's the year-on-year that matters.
Posted by Corky34 - Wed 30 Jan 2019 22:58
I'm not sure nobodyspecial can read as (s)he never answers people who've questioned his/her diatribes.