Everyone wants to know how much the new Windows RT and Windows 8 tablets are. Microsoft and its partners have been very cagey so far. Only yesterday we reported Steve Ballmer’s interview with The Seattle Times in which he gave us a wide open range of between $300 and $800 for the Microsoft Surface. Now a confidential ‘holiday roadmap’ slide from ASUS has been leaked via ZDNet. The slide shows that ASUS is aiming to market a 10.1-inch Windows RT tablet at $599. 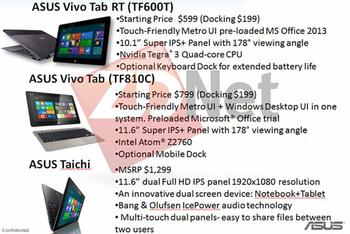 Steve Ballmer’s lower end sweet spot price of $300 is doubled by the cheapest ASUS tablet in this leaked price list. Also if you want a keyboard dock for either of the ASUS Vivo tablets you will have to fork out another $199. Especially worrying is that the Windows RT device + dock price is encroaching upon Ultrabook territory. Intel recently told c|net that all Ultrabooks will be touch enabled in the not-too-distant future. 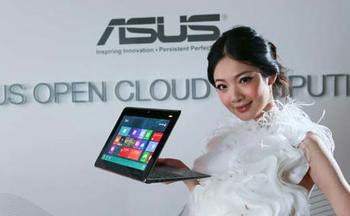 The ZDNet report accompanying the leaked slide agrees that the prices are rather steep; “Asus isn't a business brand yet it is pricing its Windows tablet as if there were some enterprise secret sauce”. Also they surmise that “Consumers will balk at these tablet prices and a) either opt for a laptop or b) go with a cheaper tablet such as Apple's iPad or any variety of Android”. The other option is of course that consumers will just wait, not being attracted to jump in at these kinds of prices. However pricing too high will waste the holiday season opportunity and miss a lot of potential sales.

Posted by Tpyo - Tue 18 Sep 2012 09:36
Well, at least Asus pricing itself or of the market makes any decision easier for me. I'm no apple fan (and re: laptops - I normally love Asus) but they've set the benchmark with the iPad pricing. Various companies have found it hard enough to compete (with a straight tablet) at a similar price up to now, and something special or extra is needed to justify anything that actively costs more.
Posted by Biscuit - Tue 18 Sep 2012 09:45
I cant think of any reason to get one of these over an ultrabook. Tablets have to be cheaper, how can asus not get that after getting so many sales with the N7?

Is this the first real sign that W8-RT will flop?
Posted by cheesemp - Tue 18 Sep 2012 10:16
I said before that win rt costing $80 dollars per licence (as stated in a previous hexus article) was dumb and here we can see the result. Balmer needed rt to be a cheap hook system to get public into ecosystem but instead its cheaper to go apple….
Posted by sykobee - Tue 18 Sep 2012 10:27
Those prices set Windows tablets up for a complete fail. A keyboard+battery dock that costs more than a decent Android tablet (16GB Nexus 7) on its own? $1000 for an Atom based tablet with keyboard. The “low-end” device is costlier than an iPad 3, a proven and popular tablet with an established ecosystem and proven OS.

Tablets have to be cheaper than ultrabooks - and Asus themselves are selling the UX31A for $1050 with an 1080p IPS screen, Ivy Bridge, 128GB SSD, etc. If you can't sell an Atom based system with a smaller screen, smaller storage, etc, for significantly less then don't bother.

Asus really should use these tablets merely to upsell customers to the UX31A and other Asus Ultrabooks. There's no other purpose to these tablets.
Posted by Tarinder - Tue 18 Sep 2012 10:39
Wow, more than I was expected, tbh.