Is your gaming PC on its last legs, struggling to cope, or otherwise not really fit for 1080p gaming? Nvidia has come up with a new idea to appeal to such users - its own boxed and branded 'PC Gaming Revival Kit'.

VideoCardz found this boxed bundle advertised in 'Spanish speaking countries'. Since the price is listed in Euros at €399, it sounds like the advert was actually found on a Spanish tech retailer's website. 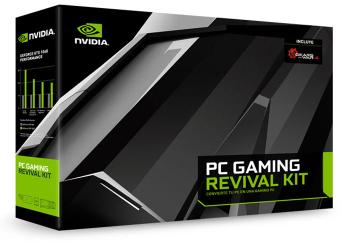 Inside the Nvidia branded box you will find the following third party branded components, which VideoCardz has listed alongside their typical Euro selling prices:

Adding up the above gives €402. So the bundle isn't a bargain, even with the Nvidia T-Shirt also included in the box. 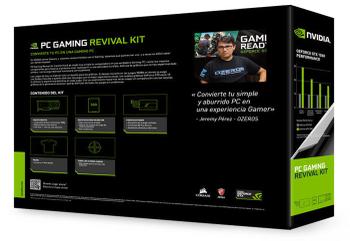 Nvidia's promotional blurb on the box states that the "PC Gaming Revival Kit will transform your computer into a real Gaming PC because it combines the best components to bring it to the next level, making start at an incredible speed, allowing you to enjoy graphics that you have never experienced..." It specifically mentions MOBA style games. On the back of the bundle box Nvidia claims the graphics card should provide an average of 40fps plus "better effects and more realism," while playing games at 1080p.

In summary, this isn't a bargain and is unlikely to be the perfect upgrade 'recipe' for very many users. And, if the market votes negatively with its £$€s, then we aren't likely to see many more of these Revival Kits.

Firm's first expansion of its 'Buy, Hold and Sell Crypto' facilities outside the US.

Australian TechTuber says the initiative has been confirmed with multiple retailers.

Posted by EvilCycle - Mon 19 Dec 2016 10:36
If they can market these heavily in the same places less informed people spend £1000 on a pre built machine, that has a top end processor, but a very low end gpu… …this would appear to casual gamers, or parents that are being nagged by their children to get gaming pc, to be a very good piece of kit and a worthy upgrade. It's blind robbery, but put into the right places it could actually turn a profit.
Posted by CAT-THE-FIFTH - Mon 19 Dec 2016 10:38
It might be more useful for Maplins and PCWorld type places,especially if instructions are included.
Posted by Irien - Mon 19 Dec 2016 10:54
The problem is that most of the PCs that would benefit from that Corsair 450w PSU are ones that need a non-ATX form factor PSU. Similarly, making the GPU a stock full-height, dual-slot model doesn't help anyone either.

The systems that would benefit from all this are the endless Dell/HP/Acer/Lenovo custom chassis that can only take a limited range of components, because cosmetically those systems go down better with non-savvy customers than traditional mid-towers.
Posted by infraction - Mon 19 Dec 2016 13:02

Irien
The problem is that most of the PCs that would benefit from that Corsair 450w PSU are ones that need a non-ATX form factor PSU. Similarly, making the GPU a stock full-height, dual-slot model doesn't help anyone either.

The systems that would benefit from all this are the endless Dell/HP/Acer/Lenovo custom chassis that can only take a limited range of components, because cosmetically those systems go down better with non-savvy customers than traditional mid-towers.

Yeah I agree, a lot of these prebuilt home PC's generally aren't made to be easily upgradable. You normally have to do a lot of research into these for example the most common thing is the HDD caddy placement which like you said rules out average length GPU's unless you do some case modding voiding your warranty. There's also PSU size, type of RAM (especially with some skylake systems needing DDR3L instead of DDR4), case depth and even the motherboard might not have a PCI-e x16 slot on it (common with the smaller form factor prebuilt systems).

The “less informed” are unlikely to do all that research, buy one of these kits thinking it's all they need and get stuck at the first hurdle. It's a great concept but I don't think it'll do well in practice as they'll have a lot of returns due to incompatibilities.
Posted by Ttaskmaster - Mon 19 Dec 2016 13:55
So all I have to do is wear an Nvida t-shirt and my PC will be awesome?
GREAT!!!