The MyFord Touch in-car entertainment system has been updated and some controls taken from its digital touchscreen and back into the physical domain. The MyFord Touch system was cited as popular with buyers when they chose to purchase their Ford cars, however when it came to living with the system many complained about its pitfalls. As well as a touch screen the MyFord Touch system has phone based technologies and voice recognition features.

Return of the knobs

Ford previously updated its range of trucks using its touch entertainment system to feature knobs for several controls such as volume and radio tuning. Now it seems like car buyers will be reintroduced to these trusty touchy-feely controls to complement the touch screen in car based systems.

In the USA the JD Power customer satisfaction survey scores for Ford automobiles have fallen “dramatically” since the introduction of these high tech touchable infotainment systems. It is reported that a lot of customer dissatisfaction has arisen from “complicated and distracting” controls for the systems. So for Ford the success of the new systems has “dragged down its reputation for quality” reports the WSJ. 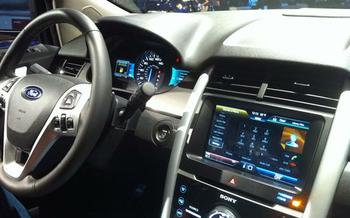 Knobs have been a constant fixture of controlling car entertainment systems since the first in-car radio. Replacing nearly all the previous standard button and knob functionality with touchscreen controls was seen as “overkill” in Ford’s case. However pre-purchase, people seemed to be attracted by these high-tech features; apparently more than half of buyers cited the touch screen as a “reason to buy” the car they chose. Ford vehicles with touchscreen infotainment systems equipped accounted for nearly 80 per cent of those sold this year.

A few days ago we saw the results of a scientific study of driver distraction from modern devices, which were meant to reduce such problems. Drivers were helped by modern tech to keep their eyes on the road and their hands on the wheel but heavily distracted by interacting with the hands-free technology, especially voice controls. Ford’s recent announcement also shows overzealous use of new tech can cause a lot of driver distraction.

Ford cars with these updated knob swivelling infotainment systems will roll out this summer.

danceswithunix
i often find myself shouting “knob” when behind the wheel, i'm sure there is a very natural user interface there somewhere if they can perfect it ;)

Anyway… A touch screen is good for GUI elements that change frequently and may perform different functions. A knob however is good for those functions that don't change and need to be quickly and easily accessed. A physical knob will also offer a lot more tactile feedback that current touch devices can't offer.