You are here:
Automotive General News

The UK's Ministry of Defence has outlined a future vision for the Royal Navy. Due to be unveiled more fully at the DSEI 2021 conference (14th – 17th Sept, Excel, London) the future vision is expected to shape how the Royal Navy might operate over the next 50 years, embracing modern technology and concepts such as autonomous vehicles, drones, modularity, and even renewable energy.

A Future Autonomous Fleet programme is going to be developed, and it will begin by being based on a design challenge for young engineers from UK Naval Engineering Science and Technology (UKNEST). The young engineers have put together a host of proposals, mixing the eminently rational with some that appear quite fanciful – and only possible further in the future. 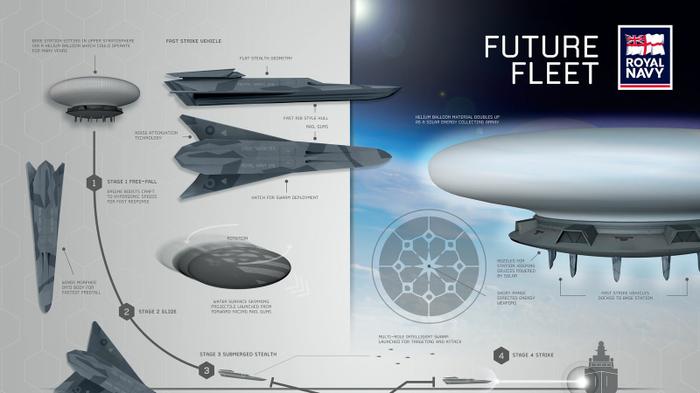 The Royal Navy's remit looks to get wider and is even going to the stratosphere, if these visions play out. One of the most interesting new proposals is for an enormous Helium filled flying drone station, powered by solar energy, which dispenses its autonomous drones at a moment's notice. At the other extreme of Navy ops, it is proposed that a flagship control vessel be underwater. Between these there is a mix of manned and autonomous attack ships and carriers, some with modular construction, and some with the ability to manufacture further drones. Sky News has diagrammatical imagery for most of the concepts talked about in the official MoD press release. 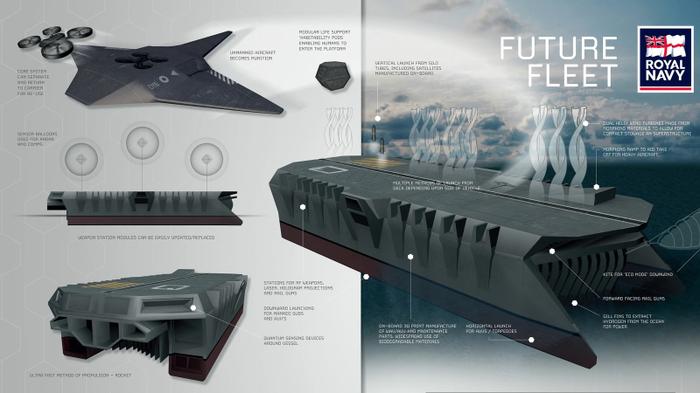 While some of the above are not close to being rolled out by the Royal Navy, the government says that it is on track to implement The Persistent Operational Deployment Systems (PODS) over the coming decade. It explains that PODS are modular elements for the Royal Navy surface fleet that can customise a ‘plug and play’ warship for a wide range of deployments. Examples of PODS are; adding an autonomous boat for surveillance and reconnaissance, quadcopter drones to deliver supplies, humanitarian aid and disaster relief stores or medical equipment. PODS are added to the fleet via heavy lift drones, so the ships don't have to come to harbour for refit.

The government is making a "£24 billion increase" in defence spending across four years to help realise plans such as those outlined above.

SpaceShipTwo reached an altitude of 53.5 miles, but the Kármán line (space) is 62 miles up.

The government is making a “£24 billion increase” in defence spending across four years to help realise plans such as those outlined above.

I'd love to think they are joking, but it's a bit late in the year for April fools joke, but no, by all means, let's spend a shed load on stuff that'll be late, not work, and come in over budget when there are more important things to spend money on…
Posted by LSG501 - Mon 13 Sep 2021 13:25
Honestly, those presentation images give off the vibe of ‘uni design students’ who have basically been given a brief and asked to ‘design your future Royal Navy’….

While I don't personally have a problem with the military getting more money (as long as they're not going to squander it) I am curious as to where the money is coming from…..
Posted by kalniel - Mon 13 Sep 2021 13:57

LSG501
Honestly, those presentation images give off the vibe of ‘uni design students’ who have basically been given a brief and asked to ‘design your future Royal Navy’….

Well that's exactly what they are, no attempt to appear otherwise.

hexus
The young engineers have put together a host of proposals, mixing the eminently rational with some that appear quite fanciful

Posted by [GSV]Trig - Mon 13 Sep 2021 14:00
I wonder how many of these students have seen Age of Ultron…
Posted by Gentle Viking - Mon 13 Sep 2021 14:02
It do look like you guys follow the Danish doctrine, which say if you buy something current make damn sure it is extremely expensive.
And if you buy anything else, make sure it is bad, over budget and will have to be scrapped before if finally get properly operational.

But to be honest i do think swarm based things are a thing to come, but the problem is without quantum encryption the Russians ASO will probably just hack it.
And knowing Denmark, the PW will probably be 1-2-3-4, just as we send deeply personal info on citizens on unencrypted DVD disks in regular mail,,,,,, that get delivered to the Chinese embassy.