The UK government's fibre broadband rollout isn't easy to describe as impressive. In a recently published report for FTTH penetration, for example, we were placed bottom three (of 28 countries) in Europe. However, credit must be given for being among the top three improvers observed by the annual survey. Some of the reasons that the UK might be lagging in these league tables is its 'copper strong' history, meaning it has 'good enough' 'super-fast' broadband until full fibre became the goal – apparently Germany and Italy is in a similar situation.

One of the most expensive and slow aspects of rolling out fibre connectivity is installing new ducts and/or poles. This infrastructure bill might add up to four fifths of the cost of full fibre deployment, reports The Guardian. With that in mind, a new UK government backed trial of installing fibre into water pipes looks promising. 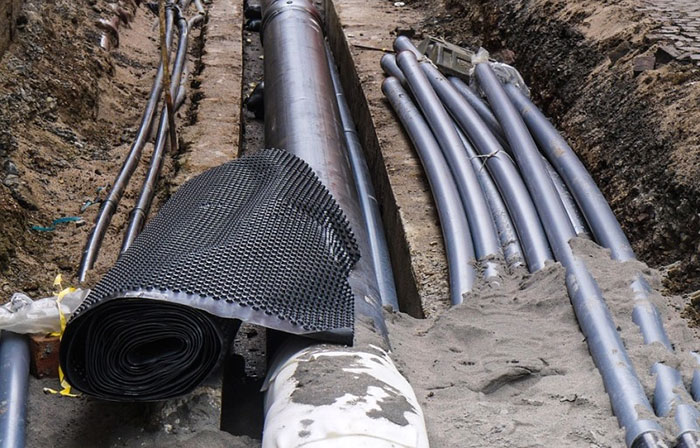 "The cost of digging up roads and land is the biggest obstacle telecoms companies face when connecting hard-to-reach areas to better broadband, but beneath our feet there is a vast network of pipes reaching virtually every building in the country," said digital infrastructure minister, Matt Warman, who was a tech reporter at The Daily Telegraph until 2015. "So we are calling on Britain's brilliant innovators to help us use this infrastructure to serve a dual purpose of serving up not just fresh and clean water but also lightning-fast digital connectivity."

Warman's talk of fresh water here is interesting, because alongside the fibre cables, the trial is going to install water leak sensors. The Guardian explains that about a fifth of the very expensive water that enters the UK's public supply is lost to leaks. Water companies have committed to reducing that waste by a half, and this might help them. The fibre cables installed in water pipes will have to be approved by the Drinking Water Inspectorate. Countries like Spain and South Africa already use water/sewer pipes for housing fibre cables, so it isn't that 'innovative' to do the same in Blighty.

Apparently it isn't just water companies looking to use their infrastructure in this way; electricity, gas, water and sewage companies can all apply to the government with regard to infrastructure sharing.

Last year, the UK chancellor Sunak diluted broadband spending plans in a spending review. PM Johnson had previously pledged "gigabit broadband sprouting in every home" by the end of 2025, but that has since changed to an aim to have a "minimum of 85 per cent coverage by 2025. Andrew Glover, chair of the Internet Service Providers' Association, described the scaling back of government ambitions was "a blow to rural communities". Hopefully, the fibre broadband via water pipes trial is a success and can be expanded upon.

Posted by Ttaskmaster - Mon 09 Aug 2021 10:39
Have they not realised that we have already been doing this for yonks, and that all those other countries only got the idea because we already sold it to them??!!

Yes, a very “innovative” concept that we should use a strategy that we are already using, and that we ourselves invented……
Posted by Saracen999 - Mon 09 Aug 2021 10:48

Ttaskmaster
Have they not realised that we have already been doing this for yonks, and that all those other countries only got the idea because we already sold it to them??!!

Yes, a very “innovative” concept that we should use a strategy that we are already using, and that we ourselves invented……

Oh, c'mon, Tasky …. when has any politician ever let facts or actual reality stand in the way of a good PR opportunity?

I mean, you know how this works. Announce it. Announce it again. Pretend you forgot and announce it. Hold a ‘review’, then …. announce you're proceeding. Add 50p to the budget, then announce increased funding specifying, of course, the ‘new’ budget while skirting over the previous one that was 50p smaller. Then, in case there's some hermit in a cave halfway up Annapurna that hasn't heard, yup …. altogether now …. announce it.
Posted by ohmaheid - Mon 09 Aug 2021 11:38
Brilliant! Now I can look forward to 200Gb/s on tap!
I'll just get me coat….
Posted by ohmaheid - Mon 09 Aug 2021 11:44
I imagine that the £4m ‘trial’, is just a way to give some rural Tory MP fibre broadband to his home, that was previously ruinously expensive for him/her.
Posted by Ttaskmaster - Mon 09 Aug 2021 12:12

ohmaheid
Brilliant! Now I can look forward to 200Gb/s on tap!
I'll just get me coat….

By the way, it was Labour that wanted free full-fibre broadband everywhere. The Tory favouritism toward private companies is the only reason GigaClear were able to give rural peasants like me 900Mbps, else we'd still be stuck with the 0.7Mbps on the antiquated former public assets that BT inherited.

Saracen999
Oh, c'mon, Tasky …. when has any politician ever let facts or actual reality stand in the way of a good PR opportunity?

It's not going to be good PR when people realise we've already got it, though.
It'd almost be like trialling the idea of reflective markers down the road, or public houses that serve alcohol… It's what they have in Norway, you know. Oh yes, very successful, there…. !