You are here:
Automotive Accessories News

With the market for dedicated GPS units eroding due to smartphones becoming more adept at navigational tasks, firms who specialised in such units have to diversify. Garmin has announced a new device which aids in user navigation, helping them also keep their eyes on the road and which complements your smartphone navigation capabilities - a portable HUD for your car.

Garmin's HUD sits on your dashboard and projects navigation information onto the windscreen (using a transparent film overlay) or using a flip-up transparent reflector lens built-into the unit. As well as turn-by-turn directions and lane guidance the HUD also offers info on your current speed, the current speed limit, speed camera locations and potential traffic issues. The system doesn't display a detailed map like a dedicated GPS system does. Garmin's HUD also automatically adjusts the display to be readable in daylight and night driving conditions. Spoken navigation prompts can come from your smartphone or via Bluetooth car audio. Another nicety is that the unit offers an integrated USB port to plug and charge your smartphone.

The Garmin HUD could be described as an aftermarket version of the HUDs built into select high-end cars such as the BMW M6 and Lexus HS. Unfortunately there is an additional expense with the Garmin HUD, it works as a navigation device only with Garmin's Navigon (iPhone and Android) or StreetPilot (iPhone and Windows Phone) apps. You have to buy maps for use with these navigational apps, map prices start at $29.99. 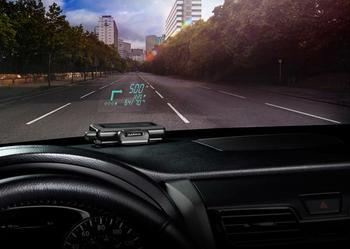 Time Magazine points out that the Garmin apps aren't as tightly integrated into phones as Apple Maps or Google Maps for example. Both these smartphone mapping systems can be controlled by voice queries and commands whereas to use Garmin's apps you will have to prod your smartphone screen before setting off.

The new Garmin HUD device, available this summer, will cost you about $129.99. Additionally to make the most of the unit you will need a Garmin StreetPilot and NAVIGON app and map, prices start at $29.99 for a regional map.

Will be interesting to see how hackable it is to run other software
Posted by crossy - Tue 09 Jul 2013 09:55
Hmm, I really like this idea - especially if it's got a good fitting that means it won't slide off of a sloping dashboard if I brake hard.

Price is reasonable too (assuming we don't go the $1:£1 nonsense), only drawback being having to use Navigon. Then again, Google Maps is okay for a “freebie” but I prefer to use a bought in app - especially since those can operate fine in areas with NO data coverage, (and yes, I know you can set GMaps to cache - but I've never found that to be practical for a long trip).

If they bring it out over here and do a bundle deal with Navigon then I might be tempted. That said, I've got ALK CoPilot on my S3 on a screen mount and that software does a directions only view (which isn't as good as the “Driving Mode” that the previous release had) which can easily be read at a glance.
Posted by big_hairy_rob - Tue 09 Jul 2013 10:00
as long as you can alter where the HUD Displays to make it comfortable for driving in different conditions, then I am all for this. Why more car makers do not already do something similar is beyond me! It would almost remove the need for a car dashboard.