You are here:
Automotive Gadgets News

A Toyota 'personal transport assistance robot'  first glimpsed five years ago is finally hitting the streets in Japan - for extended testing of its safety and practicality in the real world. A selection of volunteer commuters who work in Tsukuba city's Mobility Robot Experimental Zone will be using the Toyota Winglet two-wheeled personal vehicle to gauge its usefulness from now until March 2016.

The model under test, the Winglet Long Type, is aimed at adults but Toyota have also designed and previously exhibited shorter units for teenagers and children. During the trials approximately 80 people who work in or around the science park will use the Winglets on sidewalks to commute to and from work and when going out during working hours. Other traffic and pedestrians will be present on these same roads and pathways. 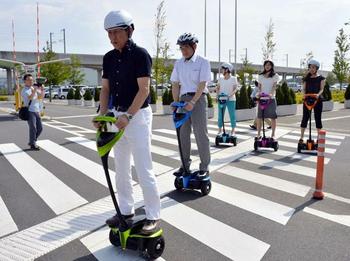 Key specifications of the Toyota Winglet Long Type include: 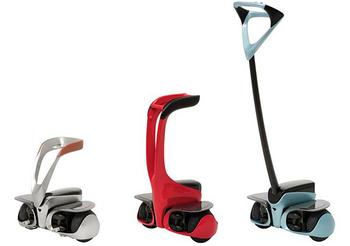 The trials are hoped to pave the way for personal transport assistance robots like the Toyota Winglet being developed and precede "the realization of mobility-robot use on public thoroughfares". As noted by GizMag, Toyota is not alone in planning these Segway-like transport solutions. Three companies in China are making similar vehicles; Robostep Robotics have developed the Robin-M1 with a range of 20Km and top speed of 15Km/h, there's also the Chegway and another called the Windrunner.

Sounds like the spec of a person, not a very fit one either.
Posted by magnetobob - Thu 25 Jul 2013 11:38
Why can I see a transition of the hipster fixie rider (not general fixie riders) moving to theses
Posted by zarnywoop - Thu 25 Jul 2013 11:38
Too lazy to get off and walk into the elevator to the office. Maximum occupancy 8 people or 2 lazy ass scooters
Posted by AGTDenton - Thu 25 Jul 2013 22:50
The beginnings of Wall-E
Posted by Andrew McP - Fri 26 Jul 2013 07:01
Japan has a rapidly aging population, and their cities are very overcrowded. Plus I doubt their benefits system is so easy to subsidise the kind of chunky scooters our pavements are increasingly plagued by. So something like this has the potential to be very successful in their local market as a mobility aid.

But otherwise I don't see these things ever taking off. Not without a faulty battery and a ramp.

I was recently reminded of the power of gyroscopes though. I took an HD out of my external USB3 dock a bit too soon, and my brain had to do a quick double take as my arm took off in a weird direction. I was impressed at how long it took to spin down actually…. though whether the drive was so impressed at being stressed like that is a different matter! I'd better back up my backup drive. :-)