You are here:
Entertainment News

Elgato has introduced a network-attached TV tuner that might spell trouble for the internal PC TV tuners we've become accustomed to.

The device, dubbed the EyeTV Netstream DTT, takes a standard digital TV signal (DVB-T) and beams it to multiple devices on a home network, allowing networked PCs or Macs to watch and record live Freeview broadcasts. 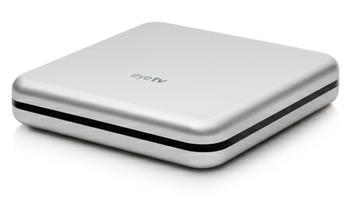 Sounds a lot like a simplified Slingbox, and it works in a similar manner - plug your coax antenna into the back of the device, and then connect it to your router/switch via the EyeTV Netstream DTT's 100Mb Ethernet port and watch it stream live TV around your home. Should your network offer Wi-Fi functionality, it'll beam straight to your notebook, too.

Featuring dual DVB-T tuners, the EyeTV Netstream DTT will allow up to two devices to watch and record TV broadcasts at any one time, and the unit offers support for Mac computers via Elgato's Mac TV software and ships with TerraTec Home Cinema for Windows users, in addition to supporting Windows 7 Media Center.

Measuring just 23mm x 119mm x 119mm, it's a compact device that also overcomes the shortage of aerial sockets around the home. Plug it into your main antenna outlet, and provided your router is nearby, it needn't be near any networked computers.

Sounds like a very useful little gadget, but there's a slight catch - the EyeTV Netstream DTT won't support DVB-T2-based Freeview HD broadcasts. Considering the £229.95 price tag, that might just put off most UK buyers. There's bound to be a DVB-T2 model in the works though, right?

* Dual-tuner or at least single DVB-T2
* Multicast support (not that home networks really support it)
* Access to the full transport stream
* Oh and of course for MythTV to support it, which I can't see being a problem provided there's nothing proprietary in how it transports the video stream over the network.
Posted by dangel - Wed 24 Feb 2010 13:30
20quid dual tuner card for each PC, job done.

dangel
Agreed, this is a waste!

Especially as all you really have to do is take the data coming out of the decoder and spit it out onto the network. If you use the right tuners they'll even hardware demux for you, so I'm pretty sure a cheap-ish FPGA could get the job done.

Still I'd be interested to see what they've got inside there.
Posted by Biscuit - Wed 24 Feb 2010 14:05
Wow at first i was thinking ‘genius’ but you could probably build a atom system which does the function of this box and a lot more for around the same if not cheaper.
Posted by s_kinton - Wed 24 Feb 2010 14:11
Good idea, but prohibitively expensive.

There cant be alot of cutting edge hardware in there to justify that price - for £229 I could build an entire HTPC!