Huawei has launched its answer to the Samsung Galaxy Fold. The new Huawei Mate X might have launched a couple of days later than its rival but it has some winning specs up its sleeve, not least its larger screen, thinner profile, 5G connectivity, and claims that it is the "world's fastest" foldable phone.

Huawei's folding phone uses just one large screen wrapping around the outside for its various operating modes. When folded it is a double sided smartphone of 11mm thick with a 6.6-inch screen on the larger side, and on the other side there is a very functional bezel section for grip, cameras, LED flash, and the power button / fingerprint sensor. 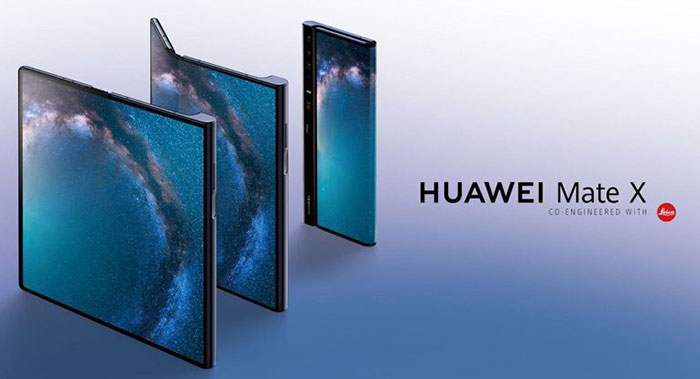 Transforming the Huawei Mate X by flexing its "revolutionary Falcon Wing Mechanical Hinge" creates an 8-inch tablet which is (mostly) just 5.4mm thick. Huawei's display is a flexible OLED panel which when unfolded presents 2480 x 2200 into your view. Folded you get 2480 x 1148 for the front panel, and 2480 x 892 for the back panel. Watching various videos of the Huawei Mate X folding and unfolding I could (unfortunately) see an uneven area of screen in tablet mode, just like with the Royole Flexpai. Full-and split screen modes are available to make the most of the area available. As you might expect by now, the UI auto-adapts depending upon the fold status of the screen. 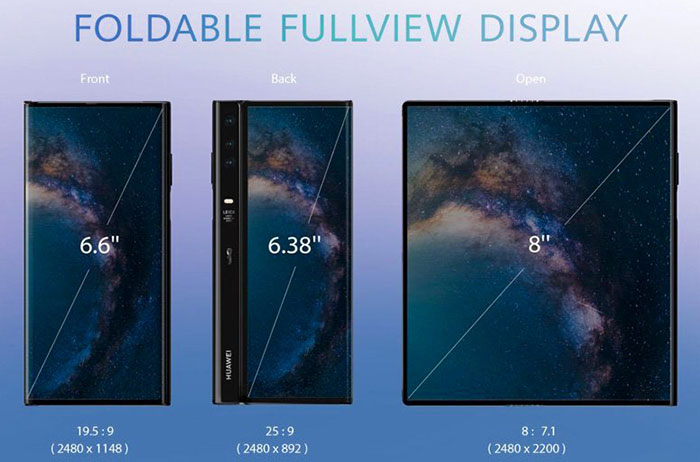 Inside, Huawei employs its 7nm Kirin 980 SoC with eight compute cores, a Mali-G76 GPU, and an NPU. Working alongside this there is a Balong 5000 2G / 3G / 4G / 5G multi-mode modem and dual-SIM compatibility (5G only available on the primary SIM, for up to 4.6Gbps downloads). 8GB of RAM is installed, and 512GB of storage comes as standard but it can be supplemented by up to a 256GB memory card if you only use SIM slot #1.

The camera setup is worth highlighting. There is only a single array of cameras but it works well in both main camera and selfie modes thanks to the way the screen flexes around. As usual for high-end Huawei kit, these are Leica design cameras. In the triple lens setup you get a 40MP (Wide Angle Lens) + 16MP (Ultra Wide Angle Lens) + 8MP (Telephoto).

For power the Huawei Mate X has two cells totalling 4,500mAh. Handily, with 55W Huawei SuperCharge, you can charge the phone up to 85 per cent in 30 minutes. This smartphone offers the usual Wi-Fi, Bluetooth and NFC, as well as the SIM-based networking. There isn't a headphone jack instead you will use Type-C, USB 3.1 Gen1 for charging, wired data transfer, and audio out. Android 9 is installed with EMUI 9.1.1. 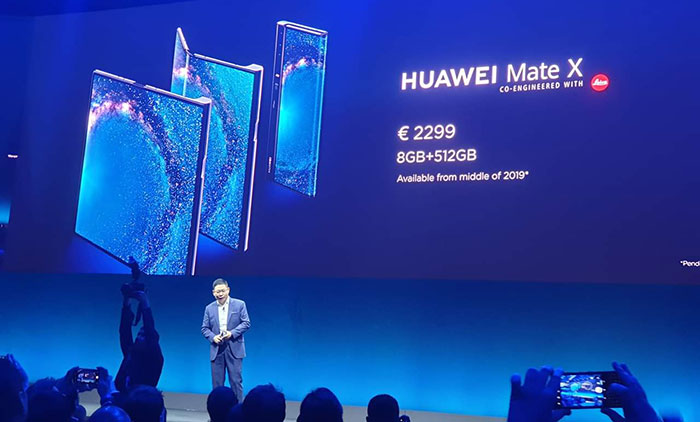 Huawei didn't let journalists go hands-on with the Mate X at MWC 2019. Hopefully it is still working to get rid of the seam/bump/unevenness when opened up. If you are interested in purchasing the Huawei Mate X you will have to wait until mid-2019, and the price will be €2,299.

Posted by Nifl - Mon 25 Feb 2019 13:58
Another heavily overpriced smartphone with a feature that is nice but far from a must-have. But I guess it wont be long before this is mainstream and the prices start to be affordable. 2 years maybe?
Posted by Tabbykatze - Mon 25 Feb 2019 13:59
As I said in the Galaxy Fold thread, I would love one of these.

Sadly, having a spare 2.5k lying around is not something I have!

But I am very excited for the next few years of folding phones
Posted by rob4001 - Mon 25 Feb 2019 14:34
still clunky as hell 10 years away yet for a real foldable screen battery tech is falling behind. Its the batteries that make this stuff clunky
Posted by Myss_tree - Mon 25 Feb 2019 16:29
Any chance that Huawei will make a standard (rigid) tablet with the dimensions and bezel lacking display of the Mate X?
Posted by Mapester - Mon 25 Feb 2019 19:43
For me all these foldable phones fold in the wrong direction that would result in twice the chance that you are likely to breaking the screen(s). It would be much better if it folded with screen on the inside with the outer shell protecting it whilst in a pocket / bag etc etc .