Making good use of the touch stylus

HEXUS: The player is offered many tasks from brain teasing puzzles to platforming? What are two of the team favourite mini games actions?
DM: We currently have some pretty intense mini-game competition going on in-house. Everyone is all about Zombie Hunter Man (one of the mini-games) a throw-back to 1980’s video games – really fun! In terms of the various worlds the fire puke rates very high.

HEXUS: How fully does Teenage Zombies utilise the dual screens and can you expand a little more on the games comic book presentation?
DM: The comics are very cool! Dan and Wayne (two of InLight’s senior artists) did a really fantastic job with them – they look amazing! The comics are presented to the Player in true comic book fashion. The Play actually has to turn their DS on its side – like a book – to read them.

We make very good use of the touch screens/stylus in Stylus Mini-games and the BBC (Big Brain Challenge). For example, one of the games lets the Player sling-shot one of the zombies, Lefty, into the air to smash alien brains and feed her cohort, Fins. In another mini-game, Lefty, a former basketball player, shoots hoops using brains instead of balls! While both use the stylus the play patterns are quite different. Actually, all of the DS controls are used pretty extensively. In addition to the D-pad, the buttons are also used for attacks, opening elevators, puking (yes PUKING!), gathering power-ups, etc. So I’d say that it was pretty well balanced from a hardware input standpoint.

HEXUS: Humour, we are informed, is important to the ethos of the game, how is that conveyed and how do you go about being humorous to a global audience?
DM: The comics certainly convey the comic tone that we were going for from the start. All other aspects of the game help support this too. The ridiculousness of the Zombies, the Big Brain and even the mini-games themselves are quite funny. 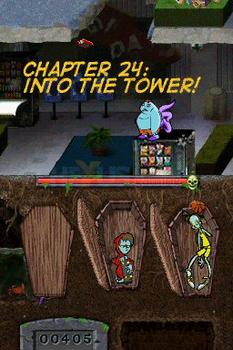 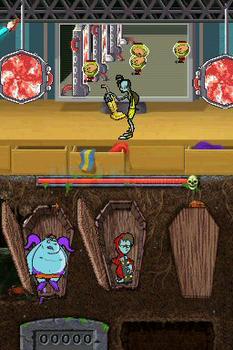 HEXUS: Great title and using your brain with some brain teasing sub games is part of the experience... Please expand fully on this aspect.
DM: Thanks for noticing. Yeah, right from the outset we wanted to create a game that relied heavily on puzzles that exercised the brain. We also wanted the property to be presented in a humorous fashion and with a play pattern that people could pick up on quickly.

HEXUS: The DS market is huge and growing, Do you feel the DS will be around for longer than most handhelds and why do you feel it has over shadowed the PSP?
DM: I really like the PSP, but I like the DS more. While the PSP tries to mimic the larger consoles it fails to capture some of the unique aspects that are inherent to the DS. The DS’s touch screen and stylus combo are really great for mini-games. I like Mini-games!

HEXUS: Could this be the first of a brand and are there any thoughts about putting this concept onto any other formats?
DM: Absolutely! We’re already discussing story ideas that will best take advantage of other platforms, particularly the Wii. You’ll be hearing more from the Teenage Zombies.

HEXUS: Any final parting words of humour for our readers?
DM:Thanks for letting me blab about our game! I think the Players are really going to get a kick out of it!