If you ever played Hidetaka Miyazaki's dark fantasy action- role-playing game, Demon Souls, you’ll probably know exactly what to expect in the spiritual sequel, Dark Souls, which launches in Europe next week.

Dark Souls is deliberately difficult. If you’re the type of gamer who gets even the slightest bit annoyed or irritated when someone scores a last minute winning goal against you on FIFA, or ploughs a retro lancer through you in Gears of War 3 before you’ve hardly had a chance to spawn, then you’re going to tear your hair out in From Software’s latest combat-focused title.

We have an embargo date to keep to for Dark Souls, which prevents us going into too much detail on the game until next week, but we can tell you it’s the toughest game we’ve ever played. It’s not that the undead and the creatures you face are particularly intelligent in the way they seek to take you out; it really just boils down to the fact that they're absolutely unforgiving and brutal in their attacks. You can swing your long sword half-a-dozen times to take out a skinny, low level enemy but, if you’re not mixing defensive and attacking strategies in equal measure, they’ll take you out with one mighty health bar-killing whack. 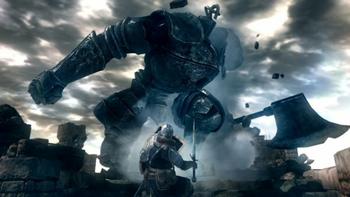 What's that coming over the hill? Yes, it's a monster the size of King Kong
Here’s a few of our stats so far:

We’re barely 30-45 minutes into the game yet it’s taken us three hours to get there. Last night, after spending over an hour trying to take down the axe-wielding, big brute of a monster, the Taurus Demon, we had to admit defeat and turn the T.V. off before we did something stupid - like throw our game-pad through the screen. Indeed, some people will call it a day in Dark Souls quite early on when faced with death so frequently, but no-one ever said it was going to be easy. The appeal of Dark Souls actually lies with this tough challenge - it's about overcoming the odds, pushing your skills (and patience) to the limits and coming out on top. In fact, it's utterly compelling. You can progress 20 minutes through a level only to die with one hit and be sent all the way back to do it all over again. It pays to learn and it pays to learn fast.

You will die playing Dark Souls - no doubt about that - but each time you do you get that little bit further, learn from your mistakes and feel yourself progressing; albeit very slowly. And, when you do eventually reach a burning fire, which act as save points in the game, or down a towering beast, you'll punch your fist in the air because you’ve worked so bloody hard to get there.

Dark Souls is the video game equivalent of marmite. There's no middle-ground here - you'll either turn it off after the first hour or immerse yourself in the world and let the bad times roll with the good. Love it or hate it though, Dark Souls really does dare to be different. Where other games give you a fighting chance and hold you by the hand to get you to the end, Dark Souls makes you work like you've never done before. Yes, it's tiring, but it's also incredibly rewarding. So, who's brave enough to step up to the challenge?

Dark Souls is due for release in Europe on October 7th.

I want this game so bad at the minute.

I have been through Demons Souls twice now, second time was easier as I had my tactics down to a tee.

First playthrough though it took me nearly 70 hours to get through it, gradually working my way forward and slow progression. Second time I only died a handful of times and done it in around 20 hours.

I'm assuming that, like the first game, as you get further through the level there's shortcuts you can unlock so that you can bypass chunks of the level the next time you die?