Sony has launched its PlayStation Now games streaming service for Windows PCs. The initial rollout started today in the UK, Belgium and the Netherlands. The PlayStation blog says that North American PlayStation fans will be able to access the service shortly. 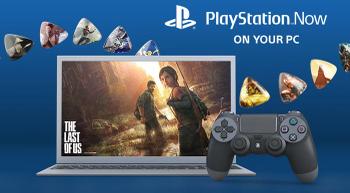 PlayStation Now is a subscription gaming service which provides access to a large back catalogue of PlayStation 3 titles. At the present time the service provides over 400 'classic titles' with 20 new titles added this month alone. These games aren't downloaded and played via an emulator or some such technology but are streamed over the internet. Progress in games is saved in the Cloud and online multiplayer modes are supported, just like in the originals.

While the processing is done in the cloud you still need the following recommended PC specs:

A hugely important further specification is that of a decent internet connection. Sony recommends a minimum of a wired 5Mbps connection while ensuring limited internet access by the rest of your family and devices "for the best experience".

So for the first time Windows PC users will be able to enjoy the Uncharted, God of War, and Ratchet & Clank franchises, and others, on their platform of choice.

To make the most of the classic PS3 titles at your disposal Sony is launching the new DualShock 4 USB Wireless Adaptor. This adapter is set to become available on 15th September for US$24.99 (or local equivalent) and works with both PC and Mac. Beyond its use for PlayStation Now games stream playing (on PC only) the device facilitates PS4 Remote Play on PC and Mac.

PlayStation Now costs £12.99 per month in the UK but you can try it for free for 7 days.

You could probably buy a secondhand PS3 and all the games you want to play for around a years subs.
Posted by EndlessWaves - Wed 24 Aug 2016 14:27
Looks interesting, but I guess they haven't added keyboard and mouse support and you have to have a controller to play?
Posted by outwar6010 - Wed 24 Aug 2016 15:12

shaithis
Slightly disappointed by Sony and this.

You could probably buy a secondhand PS3 and all the games you want to play for around a years subs.

There's literally a wireless controller and dongle inches above your comment….
Posted by Vorlon99 - Thu 25 Aug 2016 10:16
I think he's maybe confusing wired controller with the recommendation for a wired internet connection on your PC??

While I like the idea of the service, I think the price needs to be more like £5-8 p/m to make it worthwhile… 2nd hand PS3's and games are pretty cheap, and give the added advantage of being separate from the PC for flexibility, DVD/BR player for another room, and less demand on the internet connection.