The Apple vs Epic Games lawsuit got underway on Monday, and it looks set to be the source of further headlines in the coming days / weeks. An interesting early nugget, from the documentation revealed to the court, shows how much Epic Games spent on payments for developers of the games it featured in its famed giveaways. In its first nine months of operations, it is shown that the EGS spent US$11.6 million to catch the attention of PC gamers.

In summary, it looks like the freebies attracted lots of would-be customers to the EGS, but only a small percentage have gone on to buy something from the store. Another highlight of the reveal is the breakdown revealing the disparity in prices paid to developers, how many downloads each game attracted, and the UA (user acquisition) costs calculated for the respective titles.

Want to know how much $ the devs of those 'free' Epic Games Store games got, & how many copies were grabbed? Here's the first 9 months to September 2019. pic.twitter.com/5hkLb1VEjj 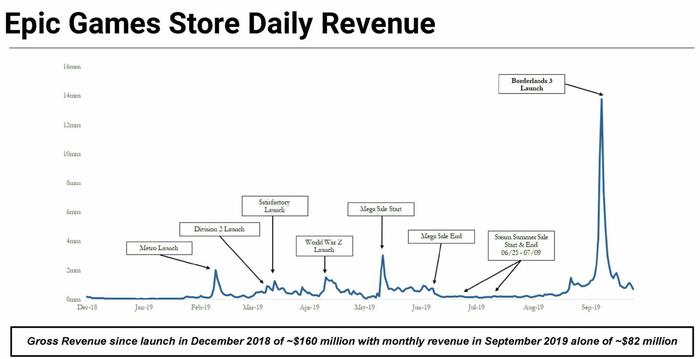 Other docs shared by Simon Carless, the founder of GameDiscoverCo, show EGS daily revenue from debut to September 2019 – showing what a big deal Borderlands 3 exclusivity was. Another Borderlands 3 document shows that Epic paid Take Two $146 million in advances, and recouped the minimum guarantee for $80 million in a fortnight. 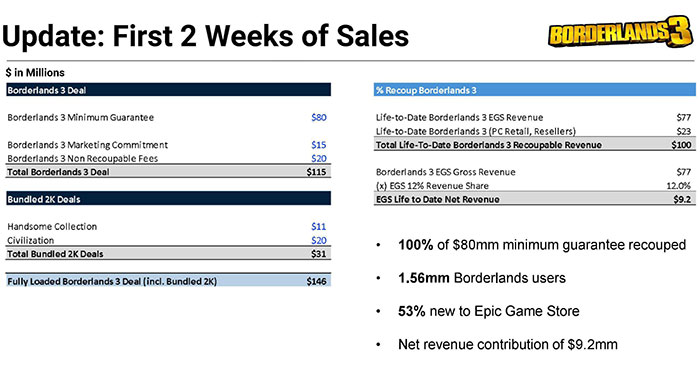 Epic Games currently has a healthy war chest, with documents showing it made $9 billion in profit for Epic during 2018 and 2019. For a more up to date figure, Epic CEO Tim Sweeney indicates that Fortnite revenue was $5.1 billion in 2020. Epic intends to reshape developer revenue sharing while it has the Fortnite-funded capacity to do so, and one might say that it already has some scalps. Recently Microsoft announced an adjustment to revenue sharing for its PC store games to match the EGS: a 12/88 store/dev split.

Posted by Ttaskmaster - Tue 04 May 2021 14:36
Well… after all that, the one thing I'm really left wondering is whether the founder of GameDiscoverCo really doesn't have an automobile in his life!! :lol:

Honestly though, if it gets more money to the devs and keeps them making games, rather than going bust like so many of the good ones have, then I'm perfectly fine with corporate domination of the world. It's pretty much inevitable anyway and a staple of sci-fi culture, so we might as well get some good games while we're off building better worlds.
Timed exclusivity isn't a factor for me as I generally don't buy games when new, as they're too pricey and I prefer to wait for the fully-patched all-inclusive DLC-laden ultimate editions when they're on sale. It doesn't seemed to have hurt their profits any, though - A few Mil spent for several Bil profit!
Posted by cptwhite_uk - Tue 04 May 2021 15:18
Yeah that's a good investment it would seem. To be honest I don't like any of the online games platforms, I find Steam feature rich but clunky and bloated with completely pointless features, and Epic Games Store very basic and lacking basic options - why do I have to see an icon the size of a playing card for every game I own, instead of a simple list?
Posted by CAT-THE-FIFTH - Tue 04 May 2021 15:34

cptwhite_uk
To be honest I don't like any of the online games platforms, I find Steam feature rich but clunky and bloated with completely pointless features, and Epic Games Store very basic and lacking basic options - why do I have to see an icon the size of a playing card for every game I own, instead of a simple list?

One thing Steam has over the others is its Linux integration. I was quite suprised at home many games,work under Proton now! Also using Lutris,managed to get Vortex mod manager working too. At least it gives me an option,if MS starts going full retard with Windows and moves to a subscription model! ;)

BTW,have you tried GOG Galaxy?? You can launch games from Steam,EGS,etc through it.
Posted by LSG501 - Tue 04 May 2021 17:11
To be honest, I don't really see the amount of spend as that much when you consider what they were going up against.

Considering how long steam had been around and the user base it had amassed the only way Epic were going to get some traction for a competing store and prevent essentially a monopoly or at best a duopoly if you include MS Store (lets be honest gog isn't really a threat to steam) on the pc desktop was to go in ‘aggressively’ with offers and better cuts etc.

IIRC aren't epic exclusives limited duration so they can also go on other stores but a bit later.
Posted by Iota - Tue 04 May 2021 17:36

LSG501
IIRC aren't epic exclusives limited duration so they can also go on other stores but a bit later.

As far as I'm aware they are, I know I got Control Ultimate Edition on Steam while on sale, long after the period of exclusivity on EGS. So really by having it exclusive on EGS the developer lost revenue. I'd probably have got it full price as it was one of the few games I thought looked interesting enough to warrant.

Really all Epic are doing in terms of exclusivity is making me determined to wait for market competition. The freebies they offer are probably being snapped up by mainly players who already have EGS installed for Fortnite looking at the overall 5% of new users they drew in for that 9 month period. So really that's a lot of investment for a potential nominal return.