You are here:
Industry Corporate News

Borderlands and Aliens: Colonial Marines developer Gearbox Software has bought the rights to intergalactic RTS Homeworld from the ongoing THQ back catalogue assets auction. The acquisition of such a title by Gearbox, with its penchant for shooters, may be a little surprising but the studio’s CEO said he is a huge fan of the series. 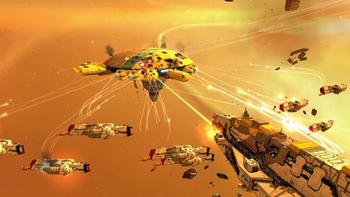 In a statement on the Gearbox Software site Brian Martel, Gearbox Software's Chief Creative Officer, said he “has great love and respect for Relic's brilliant, fun and innovative game and personally spearheaded the acquisition”. Homeworld fans shouldn’t fear any dramatic excursions from the game series they know and love as Martel intends “to preserve and assemble the purest form of the original acclaimed and beloved games, Homeworld and Homeworld 2, with the intent of making them accessible on today's leading digital platforms”.

While that doesn’t address the desires for a Homeworld 3, it will be good for fans of the series to benefit from updates to the existing games and we may well find them redistributed with modern widescreen and multiplayer support.

The Homeworld series of games was originally developed by Relic Entertainment. In a previous round of auctions for THQ assets Sega bought Relic but it is not clear whether Sega was interested in the Homeworld IP. Competitors to Gearbox in the bids for Homeworld were said to be Stardock and a group of Homeworld fans who had raised $58,644 via crowdsourcing site Kickstarter. Gearbox paid a much more substantial $1.35 million for the Homeworld license. 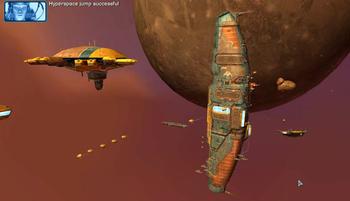 Joystiq reports that Nordic Games has picked up the rights to develop a number of other THQ properties which weren’t picked up in the first round of auctions. Nordic picked up Darksiders, Red Faction and MX vs. ATV for a sum of $4.9 million. It also acquired “Titan Quest, Supreme Commander, Frontlines, Stuntman, Juiced, Full Spectrum Warrior, Destroy All Humans and much more”.

The Nordic Games CEO Lars Wingefors said he was “very happy” with the acquisitions and intends to “cooperate with the original creators or best possible developers in order to work on sequels or additional content for these titles.” The company wouldn’t be dashing in to start up developments based upon all the projects, “in-depth analysis” and various financial models need to be looked at first.

Posted by wasto_lorde - Tue 23 Apr 2013 12:47
It kinda reminds me of the game Freelancer :D
Posted by cptwhite_uk - Tue 23 Apr 2013 12:59
What? Homeworld? They're both set in space between ships fighting. The similarity ends about there. I'm still playing Homeworld occasionally, especially at LAN events - it's a true classic up there with Half Life and Deus Ex for PC gamers.

There's some really in-depth mods for it which substantially add to the complexity of the game - HW2 Complex and HW2 Tactical Fleet Simulator are both great. Currently playing Star Trek Continuum which offers a very easy to play Star Trek total conversation, vastly reducing the tech tree and making it very easy to pick up after a couple of games.

Maybe I am wrong but in my experience Gearbox has no skill in doing justice to any game they did not create/envision. Duke nukem wasn't great at all and should have been so much better, couldnt expect a game changing release but it should have been a bit more than an average shooter! Aliens colonial marines, looked epic they had plenty of time to develop the game (pushed launch back a fair bit!) and they even demoed the alpha version which has great lighting effects and in general pretty nice graphics then they released a game totally different so they falsified a game lol! As soon as it was released the main guy at gearbox just stopped talking about it, all he talks about is bl2 which is good but it hasnt really come far from bl which was already a good game!.

Useless company should stick to just developing their own IP…