You are here:
PS3 News

Following the successful launch recently of the free-to-play MMO racer, Sodium 2 – Project Velocity on PlayStation Home, Sony has confirmed that the first ever free-to-play first-person shooter will hit its social space on PlayStation 3later this year.

Bootleggers will launch to coincide with the new re-designed PlayStation Home space later this year and will be part of the new Action District, which aims to get core gamers involved in what has so far been an area for casual players to socialise.

Bootleggers has been described by Shacknews as “rather simple, especially in comparison to the Call of Duties and Battlefields of the world,” but it does signal Sony’s intentions to create a more gritty area of home, which is demonstrated by the film-noir style screenshot below. 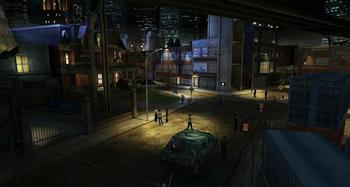 Bootleggers will feature a number of deathmatch style game modes and – unlike Sodium 2, which features micro-transactions - will be entirely free-to-play. More details on Bootleggers will be released in the coming weeks.

Posted by Output - Fri 23 Sep 2011 14:50
I don't think I've used Home other than when it launched (as HEXUS had their own section of the cinema if I remember correctly, which I wanted to check out), so this may convince me to check it out again once they have added it.
Posted by Andi-C - Sun 25 Sep 2011 16:08
Never installed it !

Just another thing on the OS, any one using this & feel its worth installing ???

Just another thing on the OS, any one using this & feel its worth installing ???

I installed this the other day & went in to a lobby (or what ever it was). Looked around for 3-4 mins & two other user's came up for what I throught was a random chat, then they just started abusing me stating how I was “Gay” & saying absurd things about my mother ??? They were obviously young (but I could be wrong) & Yanks, I found it kind of funny & that if thats what they do with their time, how sad !!!

Nice 1st visit & Un-installed short'ly after… :rolleyes:
Posted by Blademrk - Tue 27 Sep 2011 10:14
I've used it a little bit over the summer, I liked playing the (rather simple) shooter in one of the areas.