You are here:
Xbox News

Microsoft and its retail partners started taking pre-orders for the Xbox Series X/S consoles on Tuesday morning but the whole sum of pre-allocated stock was exhausted in hours. The order process was said to be less hectic than that experience by those scrambling to place PS5 pre-orders however, sites such as GameStop still crashed under the pressure.

Microsoft's next gen consoles are top ranked in the Amazon movers and shakers lists in the US and the UK. Demand has been unprecedented, according to the official Xbox Twitter account which said "we are humbled by the record-breaking demand for Xbox Series X and S. Huge thanks to everyone for the excitement". The Xbox account held out some hope for those that couldn’t get their pre-orders in place. It said that there will be more consoles allocated to retailers on the hard launch date of 10th Nov, so gamers are encouraged to use the various queuing / signing up systems run by retailers.

Hands up those who secured an Xbox One X instead

Polygon reports that the stampede for Xbox Series X/S consoles might have resulted in quite a lot of customers adding an Xbox One X to their baskets instead. This powerful but current gen Xbox sales rank went up nearly 750 per cent on Amazon on the day. It is an easy mistake to make, and as The Verge editor Tom Warren points out, one that Microsoft PR has made previously, sort of.

I've had a similar problem with Amazon before when I bought a set of micro USB cables instead of USB Type-C cables. When you search for something, like USB Type-C cables, it doesn't take too much scrolling or many clicks until you find you are looking at related or recommended - but different spec - products. With more relevance to the topic du jour, searching 'Xbox Series X' on Amazon UK today results in a set of listings with the 'Xbox One X' in third place.

With the size of modern AAA games with DLCs pushing 100 to 200GB the built-in storage capacities of the next gen consoles look like they will be the source of much gamer cursing in 2021. As standard, the Sony PS5 consoles will come packing 825GB of built-in storage. Microsoft's Xbox Series S and Xbox Series S will come with 500GB and 1TB, respectively. Thus it looks like there will be a strong market for next gen console expansion cards, especially until the consoles get revised to coming with 2TB or so as standard.

Here in the UK, various sites thought they had a strong indication as to the pricing of Xbox Series X/S 1TB expansion cards. These expansion cards feature the same custom NVMe tech as used in the internal drives. Thus they should be a superior alternative to attaching a storage device to the Xbox Series X/S USB 3.2 port. However, the pricing is a worry for next gen console buyers. 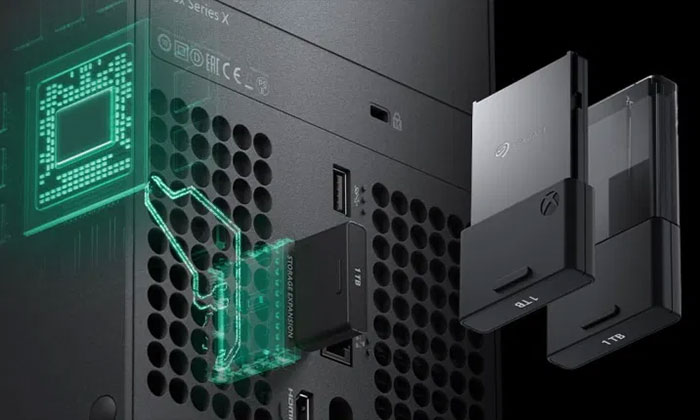 EuroGamer asserts that the 'leaked' Smyths Games pricing of a 1TB expansion card for £159 was reported in error by many news outlets. "This was down to an incorrect link in our Xbox Series X/S pre-order page yesterday, that actually pointed to the Xbox Elite Controller," explains the gaming news site. It went on to say that that there has never been such a link at Smyths and it has no idea of what the retail price for such expansion cards will be.

Posted by yeeeeman - Wed 23 Sep 2020 14:43
Thought people are poor these days, but seems like they aren't at all. Heck, even 3090 will sell like crazy.
Posted by gagaga - Wed 23 Sep 2020 14:58
Was pretty easy to order a Series S for the wife's upcoming November Assassin's Creed-athon. I'll wait on the Series X2 or whatever the revision will be.
Got a One S going cheap soon…
Posted by MaddogPepper - Wed 23 Sep 2020 15:12
Managed to get a Series X from Currys. Don't get the confusions with the One X, its a different price, looks totally different and its available for next day delivery - couldn't be further away from a Series X. I think the boost in One X sales personally is off the back of the Bethesda news and people wanting to buy an Xbox for GamePass.
Posted by judge_dredd73 - Wed 23 Sep 2020 15:12
Well it's a good job they didn't bring out an IN/XS version as many would have been left hanging…
Posted by Yoyoyo69 - Wed 23 Sep 2020 15:24
If Nintendo can get decent supply of the rumoured 4k Switch for easter time, they could take a good amount of sale Sony and Microsft lose at Xmas (if they announce, which they won't).

They clearly don't have a good enough supply yet, AMD have recently acquired more, but we'll have to wait and see.

The memory card is a real problem. Many 100GB games already without 4k, the internal SSD, aswell as the memory card, are going to be worthless.

They'll clearly try to exploit the situation too, by pushing memory card sales, which won't be cheap.