At the PlayStation Beta Rooms event in Birmingham last week we had the chance to go hands-on with a range of upcoming PS3 games, including Killzone 3 and GT 5 in 3D, Motorstorm Apocalypse and Move Games Kung Fu Rider, The Fight: Lights Out and Sport’s Champion. We’ll be bringing you our opinions on all those games and more shortly, but the first of our short features focuses on Sports Champion, a PlayStation Move launch title.

Sports Champions showcases the capabilities of the hand-held wand at a fairly basic level. Just like Wii Sports, it’s clear that it’s a party game designed to be played with all the family.

There will be a mix of modern and medieval sports game and the chance to participate in some crazy challenges involving swords, hammers and even hair clippers.

The only two games that we could demo were Table Tennis and Disc Golf and to say we weren't impressed is a gross misunderstatment.

Disc Golf
The game is self-explanatory. You have to throw your disc around a course, similiar to a golf course, in an attempt to reach the hole (or in this case the basket) first. The graphics are just as basic as those in Wii Sports, although instead of having Mii-like characters you have human contestants to choose from, including an attractive lady with a very pert bottom. Because you’re not actually throwing a disc in your living room, just thrusting your controller toward the screen, it’s just too hard to guage how hard you’re throwing it and the distance that you want it to go. The basic graphics make it so you can't perceive the depth either, so when you do think you've put the right force behind your throw, the disc will often go way past the basket, fall way short, or go veering off to the left or right.

Though we were told this wasn't the finished article, there did seem to be some glitches too. We threw the disc onto the side of a hill on our first throw, but when it came back to our turn it re-set us to a different area. This seemed to happen on a number of occasions with both players, giving you a helping hand when you land in an area that's tricky to navigate from.

We played a two player game and it took us 28 throws between us to get it into the basket. We were bored and frustrated. Even after the initial couple of throws it became crystal clear that Disc Golf is going to be one of the games on the disc that you might play a couple of times before banishing the horrible experience to the back of your mind.

Table Tennis
Okay, so this was slightly more fun than disc golf, but in heinsight that was probably because we slightly fancied the lady who was teaching us how to play rather than the actual game, and by this point we'd had a couple of beers. Okay, so Sports Champions is meant to be a set of casual games, but having played Rockstar's Table Tennis using the Wii Remote, this version not looks really poor but the controls are so over-senstive that we were never able to get a good rally going. 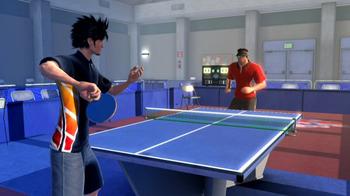 What these two games highlighted to us it is that if you've played any game with a Wii Remote, Move is going to take a lot of getting used to - you need to re-program your brain because you need to move the controller totally differently. Yes, Move does offer true 1:1 accuracy, but that need to be so accurate made what's supposed to be a casual game feel too difficult and frustrating. The whole experience left us feeling quite confused as to where the strength of Move lies, perhaps a hardcore game like Fight Night: Lights Out (preview coming shortly) will help to clarify that?

Though it's early days, and we haven't see what the rest of Sports Champions has to offer, our first experience of Move was, sadly, a frustrating one.

Check back on HEXUS.gaming for more previews for the PlayStation BETA event.