At the PlayStation Beta Rooms event in Birmingham last week we had the chance to go hands-on with a range of upcoming PS3 games, including Killzone3 and GT5 in 3D, plus Motorstorm Apocalypse and Move Games such as Kung Fu Rider and Sport’s Champion. We’ll be bringing you our opinions on all those games and more shortly, but in this short feature we focus on The Fight: Lights Out, a PlayStation Move compatible title that pits two fighters against each other in a battle of brains and brawn.

In The Fight: Lights Out you infiltrate the gritty and brutal world of underground fighting as a rugged bare-knuckle boxer. According to the Sony representative we spoke to, it will consist of a series of one-on-one fights as you move through the rankings to become the best underground fighter taking on bosses and customising your character with a variety of training regimes.

For our hands-on time with The Fight: Lights Out we stepped straight into the ring, with a Move controller in each hand, for a bout featuring two heavy-weight opponents. The first thing we noticed was that the game doesn’t offer true one-to-one control. You can hit high with either hand and you’ll rain a blow to the head and you can punch low for a body shot - there’s nothing in between. You can also pull off uppercuts and hooks and execute a range of special moves, such as thrusting the two controllers backwards towards your chest and then forwards to execute a brutal head-butt. 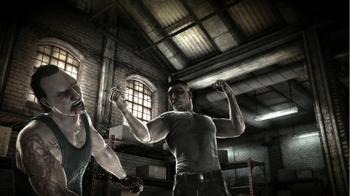 It looks decent enough, with the black and white graphics impressively emphasising the blood spilt from the fighters, but it left us feeling a little cold, like we were being shown a tech demo rather than a game with any real substance. The bouts that we were involved in felt very slow and sluggish and the fighter didn’t always follow our commands precisely. While we were getting sweaty, dodging and weaving and raining right hooks and upper-cuts onto our opponent, the fighter on-screen followed our commands rather lazily, hitting his enemy far more slowly than how we wanted him to. These were two big bruisers in the ring and therefore trying to execute a flourish of Rocky-style punches just doesn’t work, you need to be slower and more deliberate in your strategy. Ultimately, it lacks the major things that you'd expect from a bare-knuckle fight - tension, pace, excitement and adrenaline-pumping moments - but more crucially doesn't feel like you're not in total control of the fighter, something we expected from PlayStation Move.

Like all of the games that we played during this Beta event, The Fight: Lights Out isn't the finished article, but it's hard to see just how they can improve the game apart from starting from scratch. Move will have a great boxing game one day, but this isn’t going to be it.