At the PlayStation Beta Rooms event in Birmingham last week we had the chance to go hands-on with a range of upcoming PS3 games, including Killzone3 and GT5 in 3D, plus Move titles such as The Fight: Lights Out and Sport’s Champion. We’ll be bringing you our opinions on all those games and more shortly, but in this short feature we focus on Heavy Rain Move Edition, an ugraded version of Quantic Dream's award-winning interactive drama.

We like the fact that current Heavy Rain owners will be able to update their version via a download upgrading it to the Move Edition for free, but what’s the point of making this interactive drama Move compatible?

We just don’t get why Quantic Dream thought that the Move Edition of Heavy Rain was going to be a good idea. If Heavy Rain was built from the ground-up with Move in mind that would be a different story, but it's clear that this was an afterthought. The Move controller certainly gives you a new experience, but it doesn't seem to be any better than the one that was currently on offer. Heavy Rain is a great drama that brings interaction to a whole new level, but as it stands, the Move Edition is a tiring experience that requires you to complete actions that don’t really tie up with what you’re doing on screen.

We played through Chaper 1:A Sleazy Place, where Private Investigator, Scott Shelby, is investigating the case of the "Origami Killer. He ends up at the apartment of Lauren Winter, the mother of one of the Origami Killer's victims where he gets involved in a scuffle. Even simple interactions though, such as getting something out of your pocket, taking your inhaler or knocking on the door are made more complicated with Move. To knock on a door, for example, surely you should simply have to raise the controller and tap a couple of times (like knocking a door,) but instead you have to make some weird gesture that has no bearing on your actions. Having to pull, push, thrust and twist the Move controller to carry out very simple interactions becomes very tedious. Heavy Rain is a slow-paced game that will take you a good many hours to complete, so the thought of standing up for hours on end waggling the controller about to do things like opening a car door is just insane. The level that we played just didn't feel suited to Move, or optimised enough to make it a more immersive experience - even pushing a door open with the Move controller is made more complicated than the standard version. 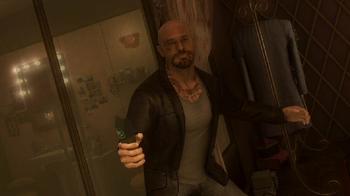 The fight scene in Miss Winter's apartment shows glimpses of how good Move could be at capturing an action-packed fight-scene. Having to smash this guy's head against a table and push him off you as he pins you down has been handled extremely well with motion-sensing and it does feel like you're in a tussle, but anyone who’s played the game will know these action sequences are few and far between.

Heavy Rain Move Edition looks set to offer a new experience yes, but based on our first impressions it isn't one that's better than the original. There's no doubt that Quantic Studios could be one of the first developers to make a brilliant adventure game specifically for Move, but it should have left Heavy Rain alone.

Posted by Rob_B - Thu 12 Aug 2010 10:23
I wasn't a fan of the demo, to me it was a slow; nice looking game with fiddly controls to make it last longer, it didn't add anything of value to the gameplay.
Seems like Move doesn't change that at all, you mention movements don't relate to actions & surely that was the problem using a DS3 that Move should have solved?

Still on the ‘no buy’ list then I guess.