Judging from the first few levels, El Shaddai looks like it will be jam-packed full of surprises. Familiar combat gameplay, which starts off with mashing the ‘X’ button liberally to take out Watcher guards, soon becomes a beautifully choreographed and visually impressive battle of defence and attack against the most unlikely of enemies, from Transformer-inspired robots to armoured hogs. Though El Shaddai largely relies on a one-button attack system it’s surprisingly in-depth as you trade blows and rely on a combination of timing, dodging and defence.

Weapon design is exemplarily and a new fighting mechanic soon comes into play as you seek to steal the weapons of your enemies to use against them. So far we’ve tried out the Arch, which works similarly to a sword, the Veil, which acts a s a shield, and the Gale which shoots out laser-like missiles. Combat, specifically against multiple opponents, often requires you to switch weapons to adapt your tactics by stunning an enemy and then stealing it. You can then combine short-range and long-range weapons effectively to take out different enemy types and play to their weaknesses. So far we’ve battled against some crazy-looking enemies and combat has been extremely fluid, addictive and enjoyably challenging. 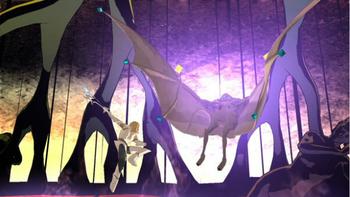 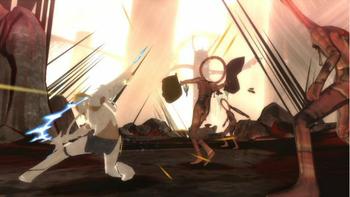 The platforming sections of El Shaddai provide some respite from the frantic, button-mashing action and it’s clear to see that the developer has once again used all its creativity to conjure up some marvellous looking levels. Switching from 3D platform-hopping action to a 2D side-scrolling brawler is one of the tricks Ignition uses to keep you on your toes, but there’s plenty more surprises too and some glorious looking environments to ogle at. In the early stages it is really the design and visual impact of the levels, rather than innovative gameplay, that make it feel unique, but so far we’ve been sucked in just as much by the platforming as we have been by the visceral combat.

The soundtrack, which haunts with its choral harmonies and switches pace with Final Fantasy-style crescendos, also plays a significant part in creating the dream-like atmosphere that runs through the veins of El Shaddai. With the promise of a motorbike ride through a futuristic city, ever-changing environments and a range of increasingly bizarre enemies to battle against, there’s every chance that Westerners will embrace El Shaddai: Ascension of the Metatron just as much as their Japanese friends. If you only listen to one sentence of advice from us this year: download the demo to at least experience its incredible artistry. We're quietly confident you'll be back for more.